When the temperature begins to slowly creep downward, you know it’s time to gradually set down the icy fruity sips and pick up something hot and comforting. There’s still a couple weeks before summer ends. But if you’re the type who can’t wait to get their spook on, you can start your transition to the scary side early with the newest Nightmare Before Christmas Mug & Spoon set from Disney! This Nightmare Before Christmas-themed ceramic drinkware set is perfect for anyone who wishes they could visit Halloweentown!

“In the unlikely event Dr. Finkelstein is preparing your brew of ‘Deadly Night Shade’, it’s good to be prepared. This frightfully fun mug-and-spoon set is inspired by the memorable scene in Tim Burton’s The Nightmare Before Christmas where Sally pretends to sip the doctor’s deadly concoction.” 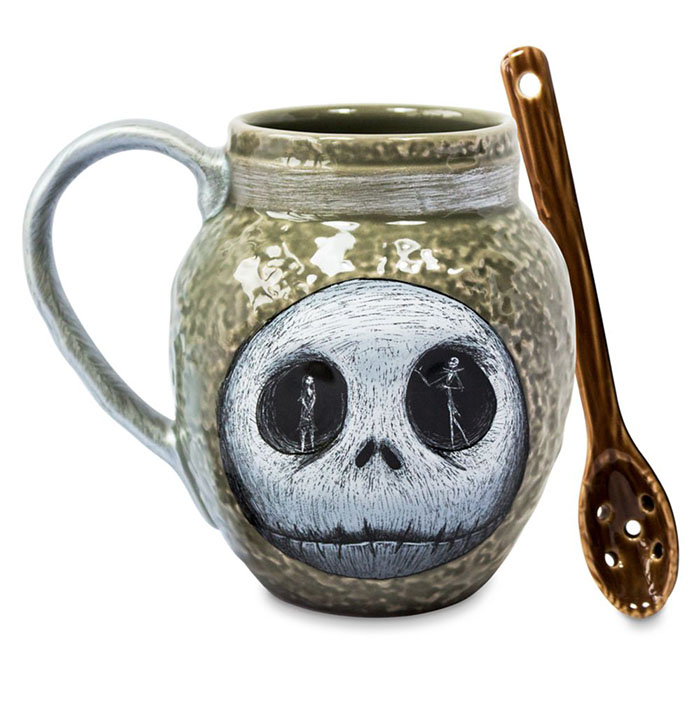 If you’ve watched Tim Burton’s masterpiece as many times as we have, you’ll recognize the mug and spoon set from the movie. The mug is inspired by the jar of ‘Deadly Nightshade’ that Sally put in her poisonous soup for Dr. Finkelstein. Meanwhile, the accompanying spoon looks just like the perforated spoon that Sally used to outsmart her suspicious creator. Sure beats sipping your morning brew from a common mug, doesn’t it?

The moss-colored jar-shaped mug features an enlarged image of Jack Skellington’s head. And inside his dark hollow eyes, you’ll spot a scaled-down version of him in an animated pose while Sally looks on from the other eye. Then on the back of the mug, you’ll see a replication of the ‘Deadly Night Shade’ label that we saw from Sally’s poison soup cooking scene. The only difference is that this mug will contain an energizing potion to help you get through the day, not one to knock you out. 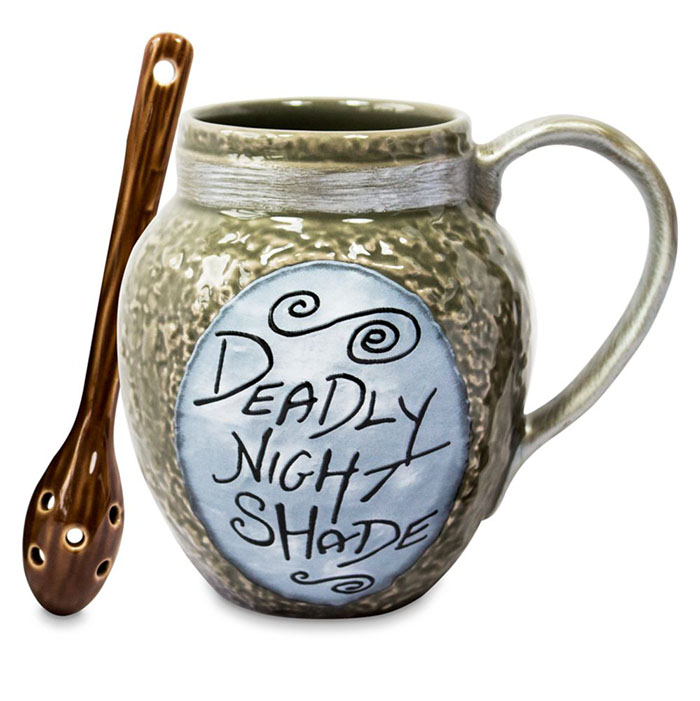 According to Disney, the creepy mug is capable of holding up to 10-oz of your favorite brew. This mug and spoon set is dishwasher safe. And when you don’t feel like waiting for water to boil in the kettle, you can simply pop this creepy mug into the microwave! Scary and convenient? Yes please! Now if only Starbucks would re-serve their Jack Skellington frappuccino this season…

Day 2, a spooky mug. I think our new @disney #nightmarebeforechristmas mug is perfect. Plus the spoon is too cute #deadlynightshade #100daysofhalloweenhappy @halloweenhappy

This awesome Mug With Spoon Set will only set you back $19.99. This price isn’t so bad, considering how eerily accurate this set is. However, you may have to wait a while as it’s currently sold out. This isn’t discouraging us from wanting it though! We’ve got our fingers crossed that a fresh batch is on its way. So keep your eyes peeled and snag the set as soon as they re-hit the shelves! Check it out here.