Taco Bell is sure to start the year 2020 with a bang with lots of new surprises. And its biggest surprise to open the year is the return of the much beloved Taco Bell Nacho Fries. The popular crispy fries and quezo combo was first introduced in January 2018. It featured fry-shaped nachos with Mexican spices and nacho cheese sauce. Obviously, the tasty fries became a bestseller until they eventually disappeared from the menu.

June last year, Taco Bell brought back the Nacho Fries again for a limited time. This time, the fast food chain offered some new upgrades to the regular fries. Customers can upgrade the Taco Nacho Fries to Supreme and Bellgrande sizes. Furthermore, the upgrades are loaded up with a hearty portion of seasoned beef, diced tomatoes, sour cream, and nacho cheese sauce. But that’s not all. It was also available in a $5 box that includes a Beefy 5-Layer Burrito, a medium soda, and a Doritos Locos Tacos. 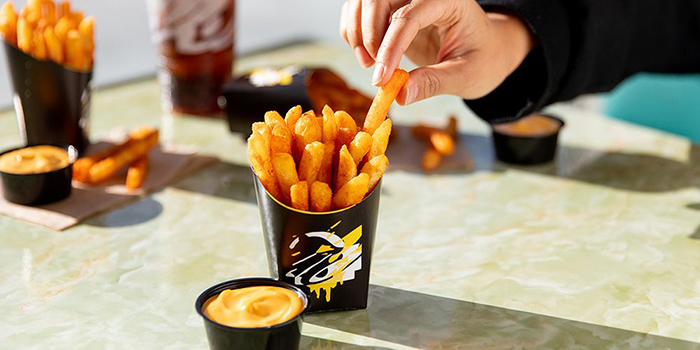 The indulgent offering was also made more special by releasing a song to go with it. Emmy winner singer Darren Criss’ song “Love of My Life” embodied the emotional journey of finding and losing love. Just like our experience with the Taco Bell Nacho Fries as we saw it come and disappear again from the menu.

Taco Bell’s New Nacho Fries ( they are my fries ). For a buck you get about a handful with cheese dipping sauce…3 of em might equal a large fries. I didn’t taste too much flavoring in mine … ????? They are decent tho and I suggest you give em a shot. You can also order a supreme fries or a bell grande with them… also you order the $5.00 Nacho Fries Box. You can actually ask the kind folks at Taco Bell to put them in anything you want on the menu for a small fee. Have a Nacho fry taco or some nacho fry cinnamon twists. ?? Don’t forget a BajaBlast and an Airheads Blue Raspberry Freeze to complete your meal ?. #tacobell #tacobellnachofries #nachofries #theyaremyfries #nachofriesbox #supremefries #bellgrandefries #airheads #airheadsfreeze #bajablast

People have been eagerly anticipating the return of the Taco Bell Nacho Fries again this year. And our favorite fast food chain didn’t disappoint its fans. The fast food company confirmed that the much-awaited fries will be returning to the menus on January 30. That’s perfectly just in time for the Super Bowl party. So, will there be any upgrades or new flavors to look forward to?

So, let the speculation begin. Will the new Taco Bell Nacho Fries come with a new take on the dipping cheese? Or will the fries come dusted with new spicier seasonings? Also, are we gonna hear a new song to come with the product’s big return? We can’t help but make wild guesses for now. But nonetheless, this great news is about to make 2020 a lot brighter.

A post shared by LovingFoodReviews (@lovingfoodreviews) on Jan 9, 2020 at 5:34am PST