The 2011 Tohoku earthquake and tsunami was among the greatest and most tragic disaster that hit Japan. Aside from major casualties and damages, one of its severe impacts was the Fukushima nuclear disaster. This brought about long-term health and environmental hazards that local residents are still experiencing up to the present time. Nevertheless, hope springs eternal for the land of the rising sun and its people. Japan may have undergone countless catastrophes throughout the years, but the nation has also managed to rebuild itself unceasingly. Such strong perseverance and willpower are flawlessly depicted in the Rebirth painting by Japanese artist Manabu Ikeda. 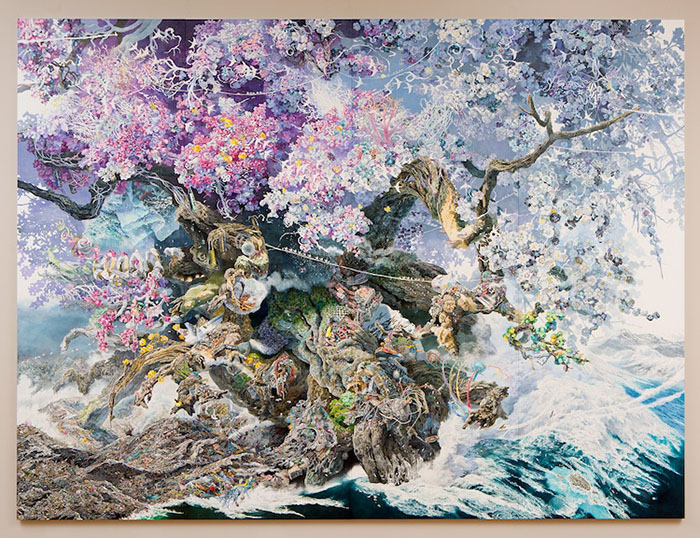 Measuring at a whopping 13′ x 10′, Rebirth is Ikeda’s tribute to his nation following the dreadful incident in 2011. This massive masterpiece was part of the artist-in-residence program of the Chazen Museum of Art in Madison, Wisconsin. It’s also the artist’s largest work to date which took him three and a half years to finish. He made this possible by working ten hours each day at the museum’s basement studio, and the rest was history. 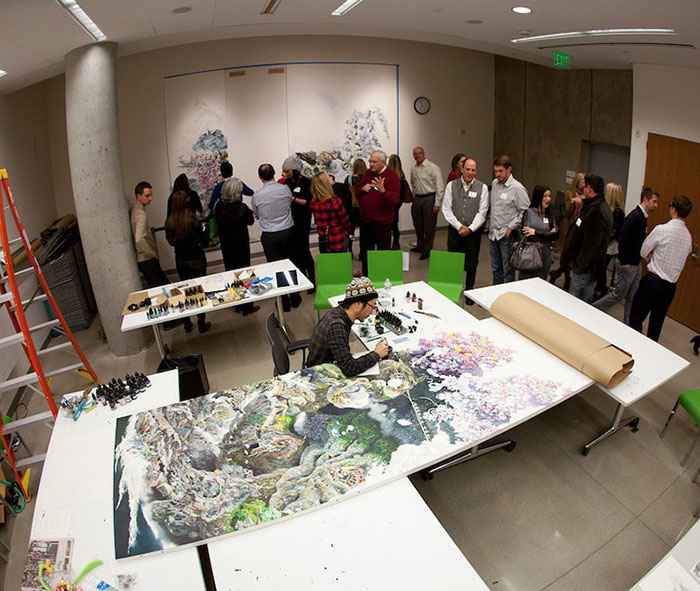 The painting portrays a subtle yet powerful clash between man and nature. At a glance, one can immediately distinguish a tree emerging from the remnants of the tsunami. But a closer look would reveal much intricate details and complex stories. Temporary refuges blooming among cherry blossoms. White wisps of people and animals striving to survive. Vehicles, signages, train tracks, and whatnot stacking up against each other. Hidden messages seeking to be discovered. The perfect balance between restoration and destruction as imagined by Ikeda and rendered with pen and acrylic ink.

“Because I see details when I observe things, rather than the whole, I find pen and ink to be the best tools to express how I see them.” 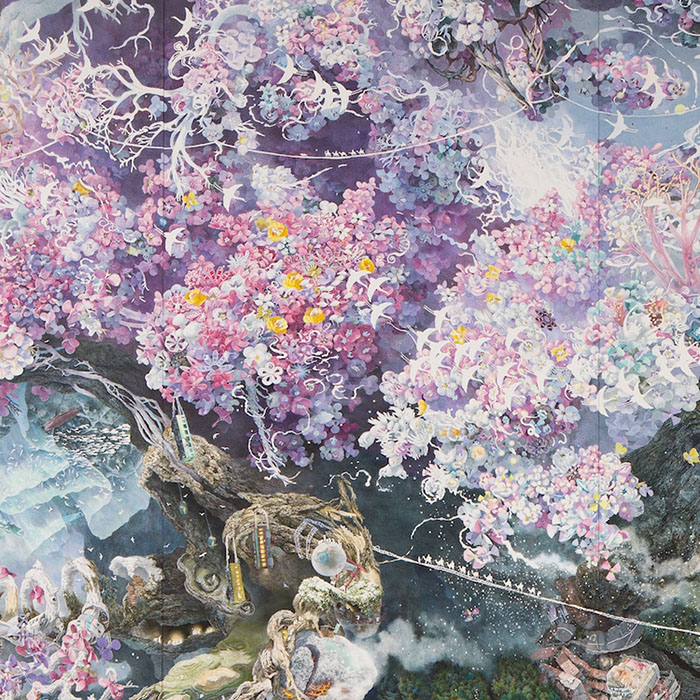 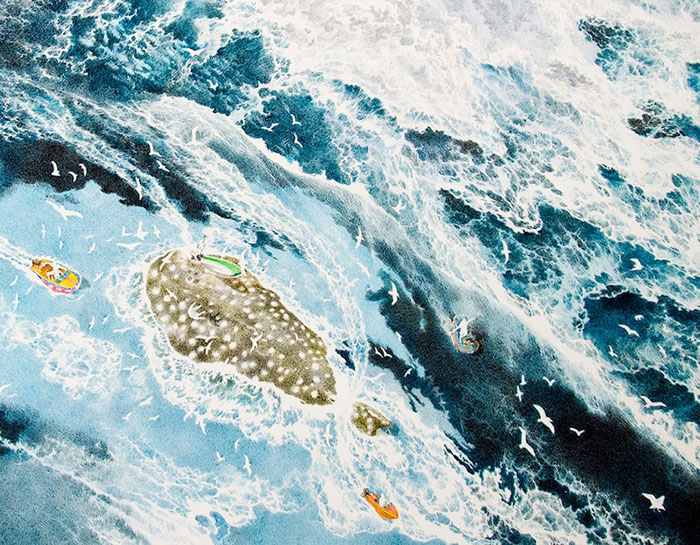 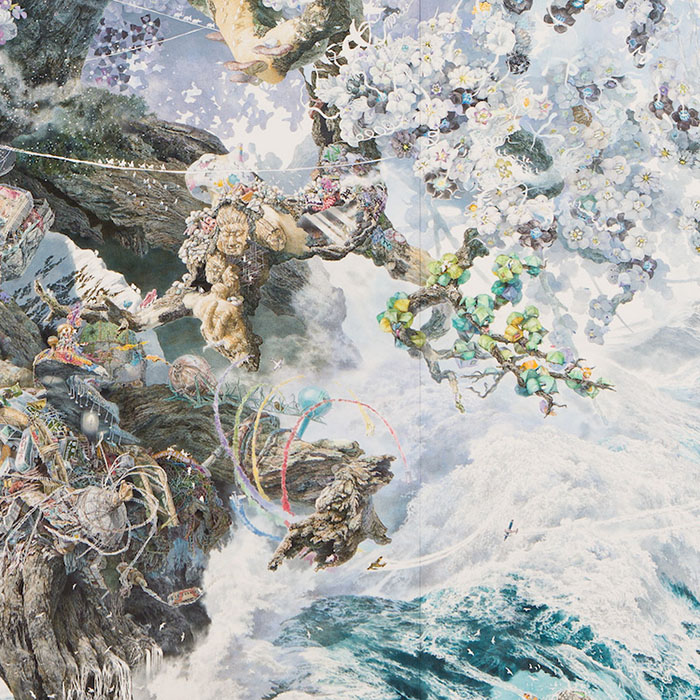 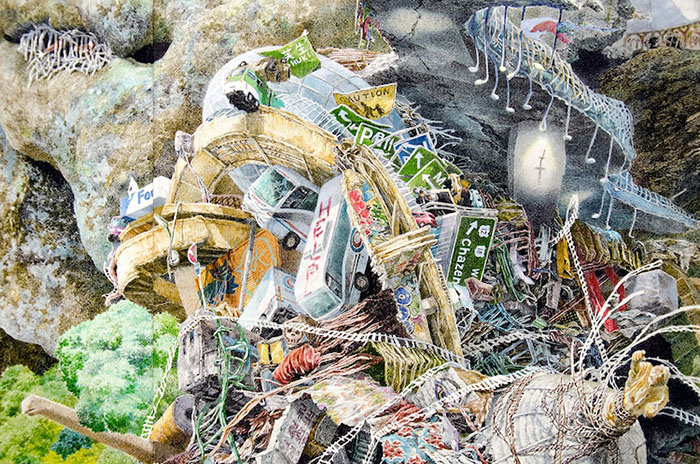 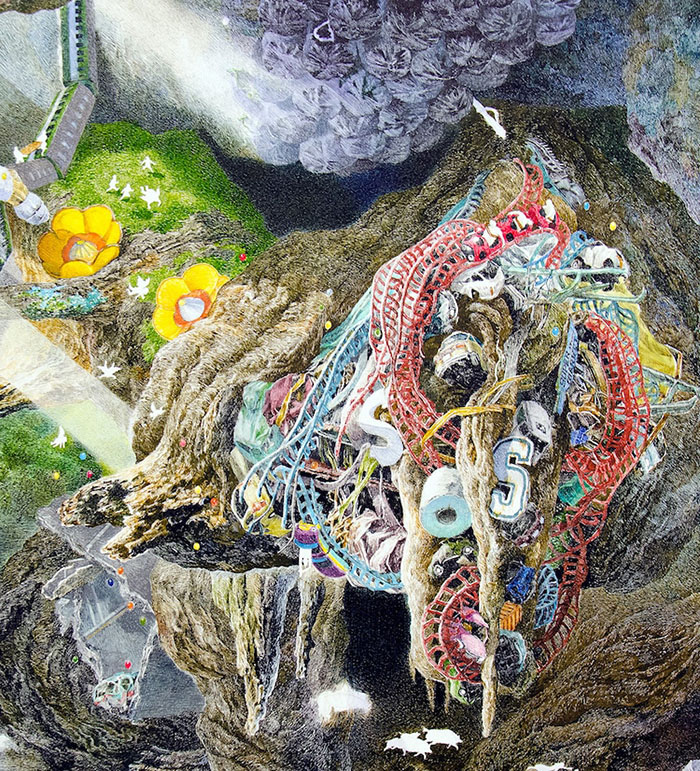 While the artwork deals with a serious and sensitive matter, Ikeda still managed to incorporate humor into his work. Just like in real life, a little bit of humor and positivity goes a long way in speeding up disaster recovery. A keen and thorough observation would reveal hints of Wisconsin in the artist’s piece. These include signage that reads “Chazen,” a local Octopus Car Wash, a Home Depot, and even a Bucky Badger flag. 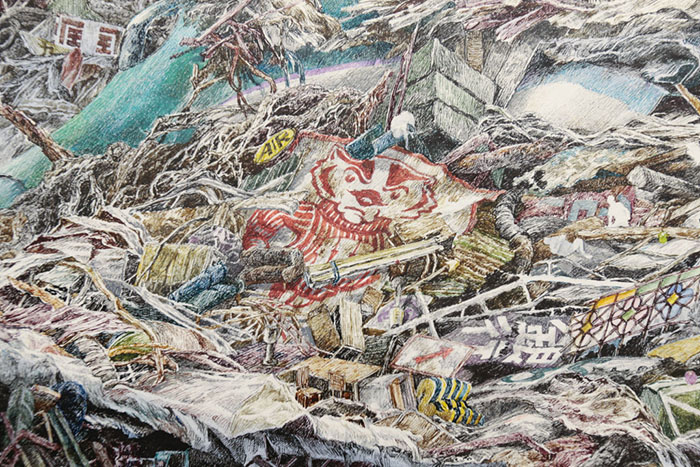 “My goal is to faithfully express my view of the world in my composition, but I don’t intentionally depict detailed images.” 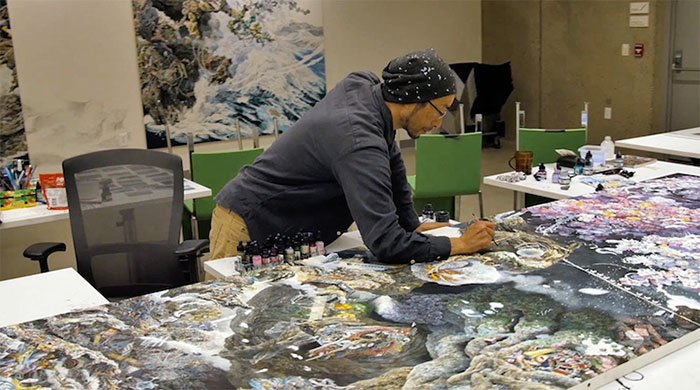 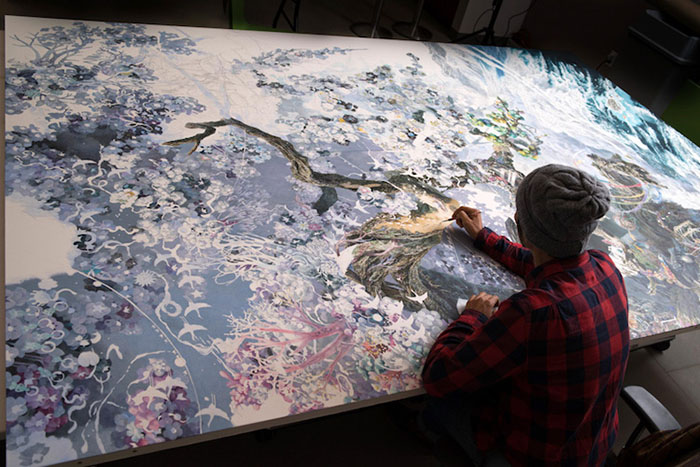 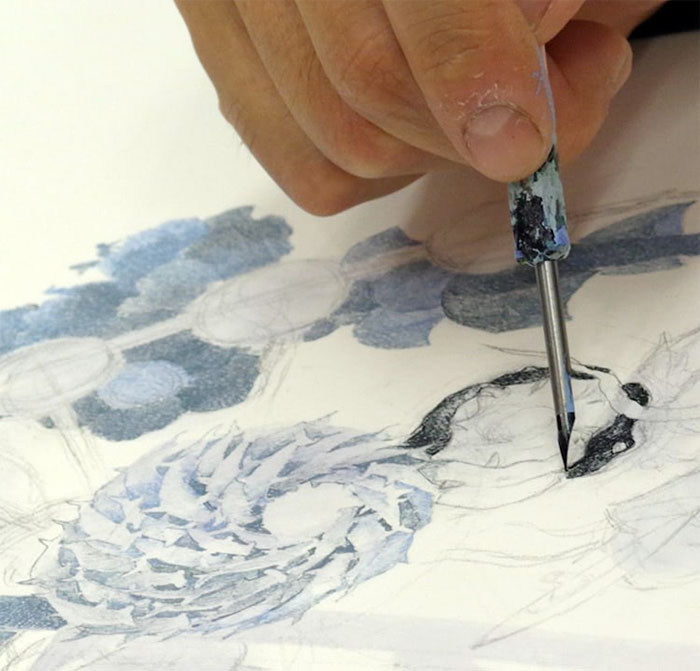 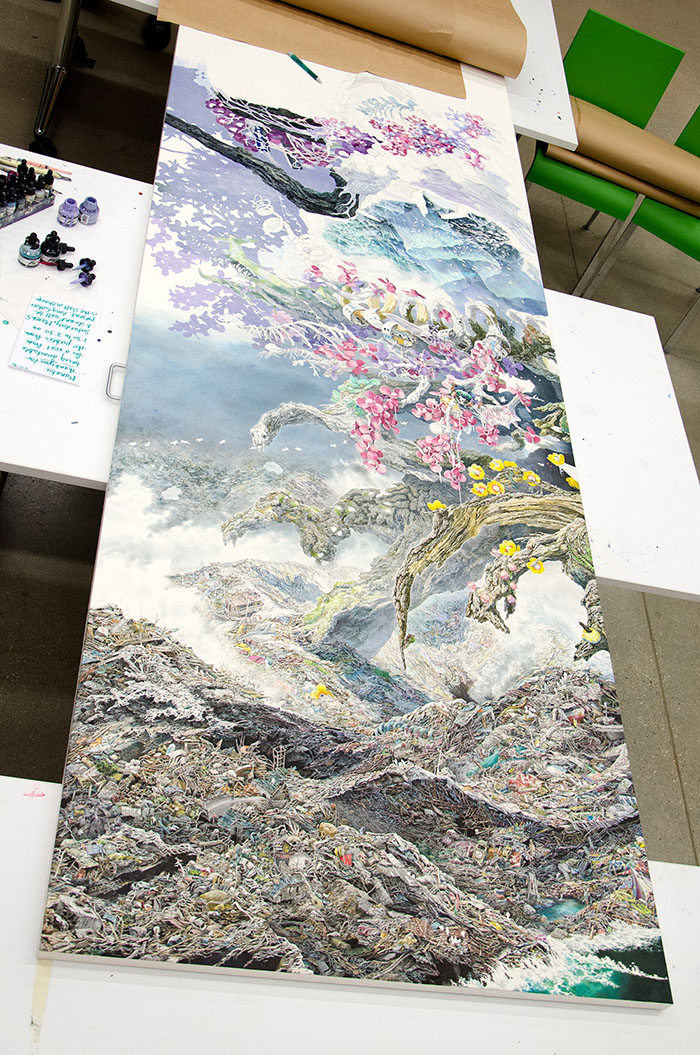 Completing the artwork didn’t also come easy for Ikeda. Given its massive size, anyone would presume it’s seemingly impossible to complete. On top of that, the artist also had his fair share of difficulties during the process. One of which is a skiing accident that resulted in a dislocated shoulder. This unfortunate event rendered his dominant hand useless for quite some time. Determined to finish the piece on time, the artist started training his left hand to draw. After a few practice drawings, he proceeded to work on Rebirth like nothing had happened. Indeed, Rebirth is such an emotional piece that features powerful stories of both Japan and Ikeda.

Manabu Ikeda’s First Attempt at Drawing with His Left Hand 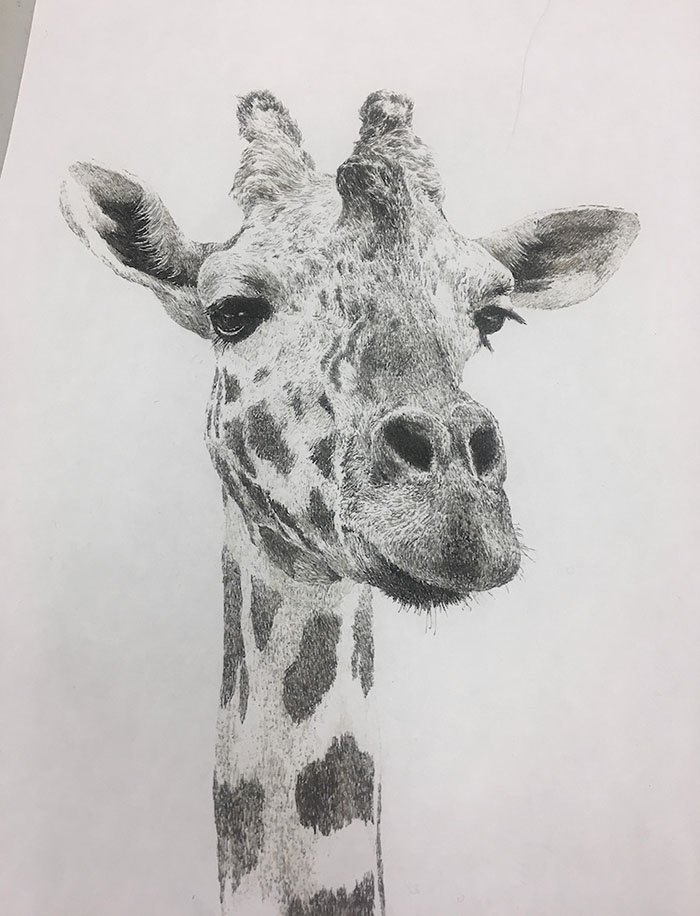 Watch this short film by Clayton Adam to see snippets of Ikeda at work, and prepare to be touched by the artist’s heartfelt reaction upon seeing his masterpiece up on the walls of the museum for the first time.