Mom Recreates Her Daughters Drawing Of Her And It’s Hilarious

A mom celebrates every little achievement of her kids and considers it as a significant milestone. So when a Reddit user found an old watercolor painting made by her daughter 10 years ago, she decided to post a selfie next to it. Amusingly, the drawing was supposed to be a portrait of her. In order to make her daughter’s drawing look good, she comically tweaked her makeup to recreate the drawing. Of course, her amusing recreation of the drawing got plenty of laughs (and thousands of shares) online.

As a kid, Reddit user 10fletcher’s daughter Mia drew a portrait of her which has been hanging in their home for the past 10 years. On a whim, she suddenly thought of posting her daughter’s masterpiece on her Reddit page. But posting the drawing alone just won’t cut it. So, a brilliant idea came to mind. She then put her makeup to better use to recreate her portrait. There’s the long straight eyelashes, dark circles under the eyes, floating eyebrows, bloody red lips, and an extra line of teeth. After copying all the striking features on her face, she snapped a photo next to her daughter’s masterpiece.

“My kid did this portrait of me over 10 years ago. I still look the same, IMO”, she wrote on the caption.

Her daughter was rather shocked (and perhaps a bit embarrassed) when the post became viral. But she later appreciated her mom’s effort of replicating her drawing. She even took a screenshot of the now-famous post and shared it with her friends. 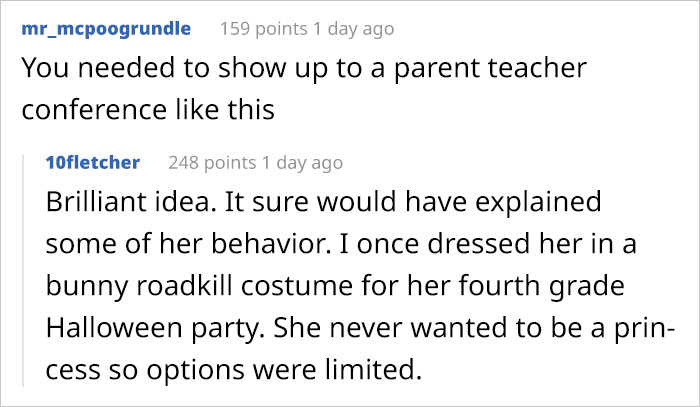