Earlier this year, KitKat is broke another territory in the world of sweets, and it’s absolutely mouthwatering. The famous chocolate wafer treat have appeared at the frozen aisles in the form of KitKat Ice Cream Cones, and it’s the stuff of your wildest dreams. Since its surprise release, KitKat and Drumstick fans have raided frozen aisles to taste the ice cream version of the chocolate wafer snack.  And everyone loves it, of course! 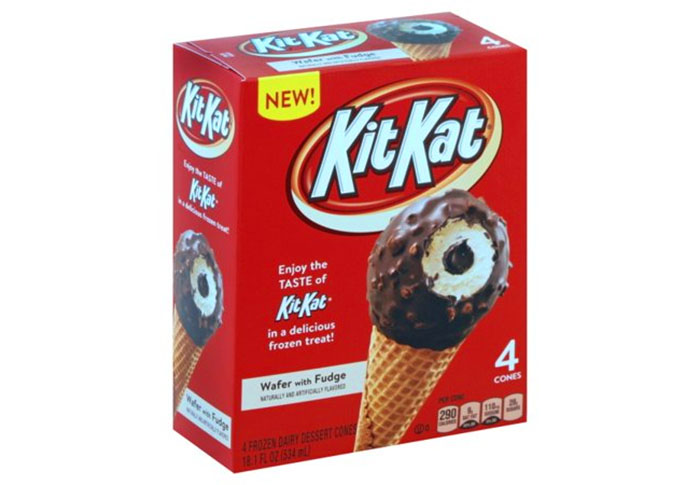 Over the years, Nestlé’s Drumstick line has found the ice cream-loving public’s sweet spot through its myriad of delicious flavors. From the much beloved Classic Vanilla to its more daring offerings, Nestlé has proven to be a timeless treat for all ages. However, despite the Drumstick brand’s many flavors and combinations, the Kitkat Drumstick is the first of its kind. Which definitely makes it a game changer!

Break me off a piece of that KitKat…ice cream cone! The chocolate shell isn’t any ordinary chocolate shell…it’s got KitKat wafer pieces embedded into it! ?Full review on the blog!

Underneath the delicious shell is the creamy and delicious vanilla ice cream. This ice cream is slightly thicker in consistency compared to a classic Drumstick cone and is a tad sweeter. After a few bites, you’ll hit the rich fudge center, which is very comparable to the Drumstick fudge center (if not identical). The cone itself is crispy, sugary, and lined with chocolate on the inside. Once you get to the bottom of the cone, you’re in for a treat because it’s filled with rich “chocolate-y nugget”.

Each box contains four delicious cones, which probably won’t cut it, if you’ve got a super sweet tooth like me. If you haven’t had the chance to try these yet, you can still find them in frozen aisles nationwide. And it’s also exclusively available at Krogers for only $4! Hurry, before Nestlé takes it all away.