What have you been up to since the world locked down? Are you over the movie marathon phase? Then you’ve probably started looking for a productive way to pass the time. There’s tons of different activities for us to try, but baking appears to have become one of the most popular quarantine activities lately. However, not all of us are born with talent of being good in the kitchen. So when people who depend on ready made mixes try to make their own bread, you can already expect the baking fails.

Baking is one of the coziest things you can do when you’ve got a lot of time. You’ve got to admit that watching all the ingredients come together in the mixing bowl is absolutely fascinating. And smelling the bread or pastry’s delicious scent as it bakes in the oven feels like magic. And I think we can all agree that homebaked goodies simply taste better than what we can buy in stores. But baking isn’t exactly something you can ace in the first try. It takes a lot of practice and even more patience to move on from having baking disasters to becoming a baking pro!

Making one’s own bread is a fascinating and interesting process. The result of your messy labor can surprise you. Especially if you’re a first-timer or if you didn’t read the recipe and instructions thoroughly enough. In a sense, baking is an art and exact science rolled in one! But paying attention to the exact amount of ingredients that go into the pastry is something people often learn the hard way. More often than not, you’ll find people reduced to a crying heap on the floor for all their efforts, or in some cases, laughing at the unexpected outcome.

I can’t bake for shit ? pic.twitter.com/CNULq9Elqg

Tried putting cilantro in my cookie today while baking pic.twitter.com/AHba5317dE

Since everyone’s trying to bake these days, the baking supply industry has reported a record spike in their sales. Baking yeast sales shot up 457% over last year for the week ending in March 28th alone. Then, flour sales also rose over 155%, butter sales went up 73%, baking powder also saw an impressive 178% increase in sales, and even eggs, despite being staples, also increased revenue by 28%! “It started to look like Thanksgiving and Christmas all rolled into one. People have time on their hands and are trying to save money,” Hopskinville Milling Co. President Robert Harper said.

The sudden sales spike in baking materials only proves that baking is one of the most popular quarantine hobbies right now. Even if most of these ingredients will ultimately end up in their inept creators’ baking disasters. We’ve compiled several of the most hilarious baking fails for you to feast your eyes on. Check them out below!

“A bit too much of baking soda.” 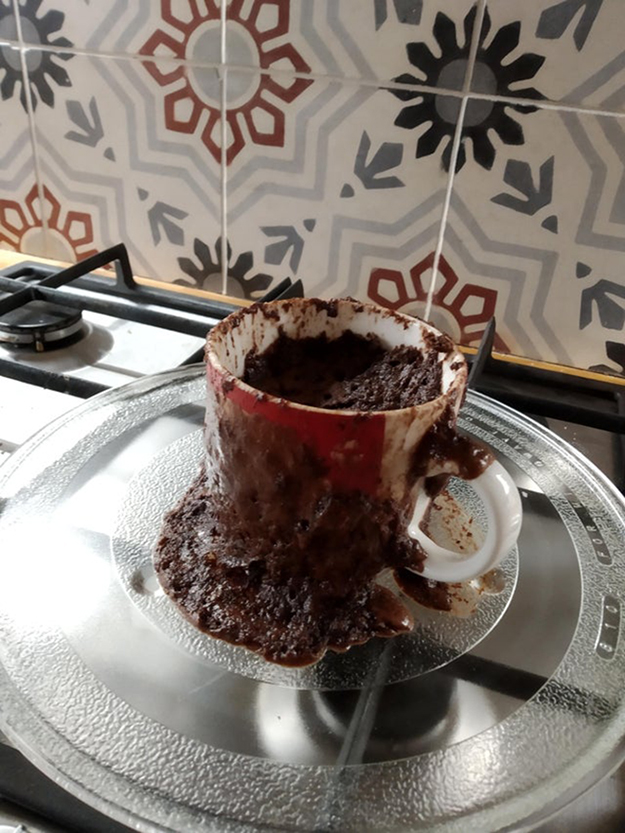 Here are some handy tips to avoid failing your baking attempt

Professional pastry chef and bespoke bakery owner Beth Coombes shared some helpful tips to help you get the best batches every time. Her first advice is more common sense than anything, as she recommends that you should always read the recipe in full before beginning. This will surely save you from encountering that frustrating moment when you realize you don’t have a certain ingredient or didn’t do the preparation procedure properly.

“Baking is such a science and things must be done in the correct order to achieve the end result you want.”

This is why I’m a scientist. In case you were wondering this cake doesn’t taste good either. Think I’ll keep supporting local bakers and find a new quarantine hobby to try. #bakingfail pic.twitter.com/v0EOkwfoq1

So…this looked to be baking perfectly and happily in the oven…this was the surprise on the other side #nocomment ? – #bananabread #bakingdisaster #bakingfail

HELP I tried to make pretzels and they went MUTANT ??? oh well, they still taste good (but everything tastes good with #nutella)

Mistakes in baking are pretty common

Coombes also recommends weighing all the ingredients before starting so you won’t lose your focus on the method when you begin. She also noted that not setting the oven to the right temperature can often destroy your masterpiece. Set the temperature too low and your cake won’t bake. Set it too high and you just might end up taking out a pan of charcoal!

“Cakes cook on so many different temperatures to get different results, so don’t think, ‘Ah, this temp will do’, as it might not work, and you’ll learn that the hard way.”

Everyone Easter Baking? ?? My make-shift attempt at making a bunny failed me, but I think I baked a fat cat instead? [Swipe right for Garfield] ?? Tastes great though! Learning Moments…Very open to tips! Will try again next year #maybe but for now will order from @shortandsweetcupcakes ? #supportlocal #therealfoodvibes #easterdesserts #easterbaking #bakingfun #bakingshapes #baking #chocolatechipcookies #pillsburycookies #pillsbury #quickbake #homecooking #bakingfail #sweettooth #thegoodandthebad #baked

Quarantine baking Take One. Half of the cookies are burnt, half are raw, and the fire alarm is going off.

Lessons for the future.
1) My fire alarm works well
2) My neighbours are alert
3) My baking skills can only improve from here. Good thing I didn’t start with bread. pic.twitter.com/LU73Vp2u6f

Sorry I haven’t posted in a while; I’ve been baking pic.twitter.com/wS59AONAlY

I made banana bread. I followed the recipe exactly ish, but it failed .. pic.twitter.com/f4h9fSD9Hr

Another elementary mistake that baking beginners commit is not studying and getting to know the jargons and techniques employed by bakers. There’s so much more to baking that simply throwing all the ingredients into a mixing bowl and mixing them all together with a wooden spoon! So you might to take some time to learn these important words and techniques before setting out to make that cake you’ve been craving lately.

“For example, ‘beating’ or ‘folding’ techniques. If you’re not sure what a word means, give it a little Google first and you’ll be good to go.”

My wife has started baking. And now we know why she doesn’t normally bake cakes. pic.twitter.com/fK3hA37fas

As failed as my bunnies? pic.twitter.com/I3U0XSGMBe

I’m not much of a baker. I can cook alright, but baking…not so much. So, today I tried my hand at some lighthouse cookies, since I’m from Florida.

How do you think they turned out? pic.twitter.com/kKmB07XPmB

“This is the outcome of using pie crust I have never made before. Apparently the egg custard somehow got under the pie crusts while baking, and that big bubble in the middle is the pie crust.” 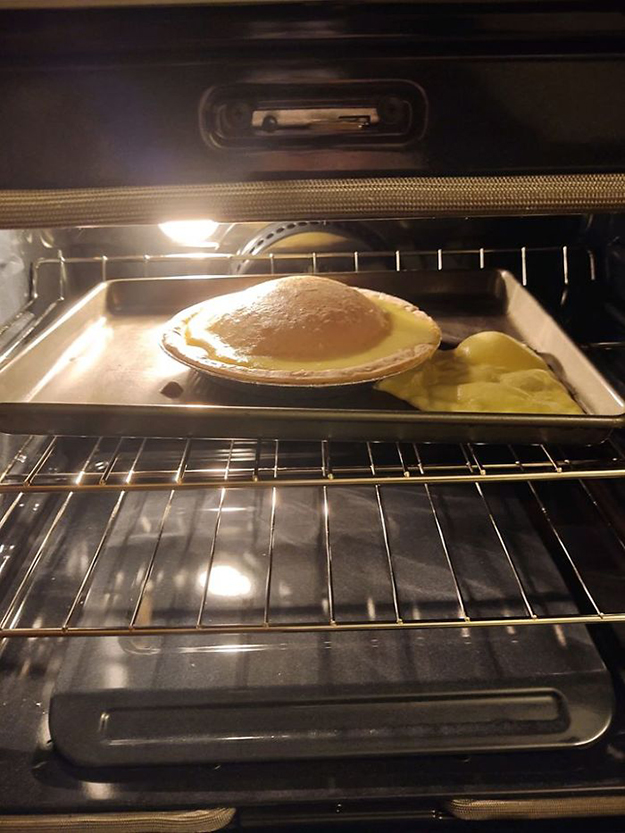 I think I made the peanut butter cookies a bit too big. #bakingfail #thisishowiquarantine #pugsofinstagram #puglove

Your failures may help you improve your baking skills

In my attempt at making pizza, i discovered my yeast had expired in 2010. And the supermarkets had ran out of yeast. Then I read about making yeast from dried fruit. I used dried longan and here is an interesting outcome. The dough was stretchy and after baking, I ended up with a very pleasant tasting crispy and slightly chewy sweetish flatbread. It went really well with crunchy peanut butter. #baking #yeast #dough #driedfruityeast #flatbread #homemade #bakingfail

Sadly my challahday easter bunny didn't quite work out. Seems to have come down with some hip dysplasia, ear disconnection, and a touch of elephantiasis in the oven… I think the main culprits here were uneven working of the various strands, slight underproofing, and perhaps some rusty baking skills ???? Next time… #challah #bread #baking #breadsculpture #easter #bunny #hipdysplasia #breadart #bakingfail #breadmaking

Most of the featured baking fails may appear to be inedible, but the bakers’ attempts certainly put us in a good mood! Hopefully this compilation inspires you to put more effort in your own baking. Which bake was the best of the worst? Have you done your own baking? Tell us in the comments!