26lb Chonky Cat “Mr. B” Finally Found His Forever Home After Getting Adopted

Being cute doesn’t always equate to being small. Sometimes, it’s about being chonky too, and BeeJay, aka Mr. B, is here to prove that. It was back in August 2019 when the Morris Animal Refuge first introduced the 26-pound furball to the online world. The Philadelphia-based animal shelter sought the help of the online community in finding the gentle giant a new loving home.

While it’s easy to assume that Mr. B would have a hard time finding a home because of his incredible heft, things turned out quite differently. In fact, the shelter’s website even crashed due to the influx of inquiries and applications – approximately 3,000. The tweet introducing Mr. B undoubtedly generated quite a buzz as well, gathering over 14K retweets and nearly 50K likes. Apparently, it was love at first sight for a lot of people! More importantly, it’s good to see Mr. B receiving an outpouring of love despite his unusual size.

OMG, big boi Mr. B is a CHONK. He’s a chonk of a chonk. He redefines the term. Can you guess how much he weighs? More importantly, can you give him a home? Adopt this jumbo-sized package of fluff & love: https://t.co/v8aB6PzBbL. Please RT to help this sad-eyed guy find happiness! pic.twitter.com/tquRuvRaws 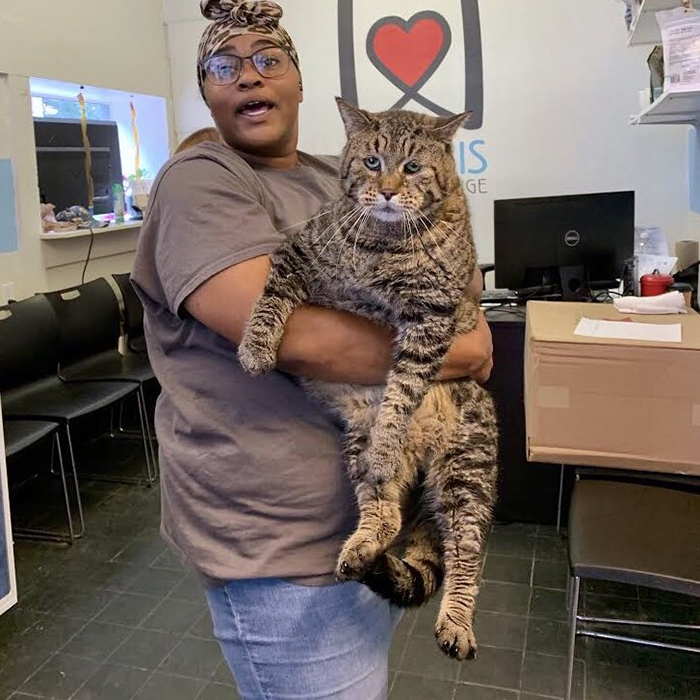 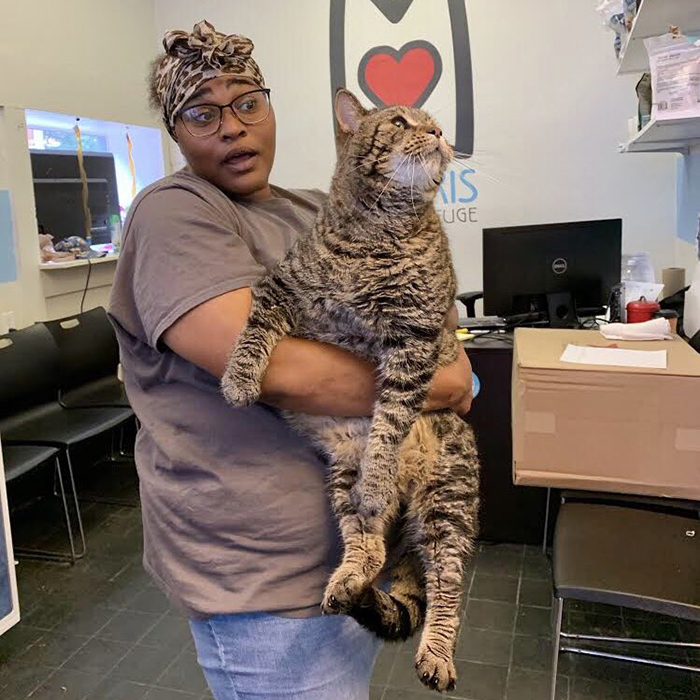 Weighing a whopping 26 pounds, chonky cat Mr. B has instantly captured the hearts of many

Friday night hangout! Big thank you to each and every single one of you. Seriously, we mean it. Thanks for all your love and support for Mr. B! He makes all the attention look so chill.

So, after much deliberation, the shelter was finally able to choose the chubby cat’s new fur parents. Thankfully, his new owners know and understand just how much Mr. B means to the online community now. As such, they’ve set up an Instagram account to keep everyone updated on the fluffy feline’s daily adventures and musings.

His Instagram page, which goes by handle @chonkymrb, has gathered 17.4K followers to date. In addition to Mr. B, the couple also cares for five other cats adopted from different shelters. Keep scrolling down to see more of the cat’s adorable snaps!

Happy Thanksgiving from us at The Fur Farm, friends! We hope you have the most wonderful day filled with family, love, gratitude, a moist turkey and all the best fixins! We have SO much to be grateful for, but this year we’re particularly grateful to be together. Last year I was deployed for the holidays so it feels amazing to be home and with Chris and family. This photo is from the night we went to bring Mr. B home and we can’t thank @morrisanimalrefuge enough for giving us the chance to love this big fuzzy baby boy. Happy Holidays from our big furry family to yours!

That belly pouf! Go on, admit it. You want to lay your head on Mr. B’s pillow belly. We’ve done it and it is???

The toddler woke up from his nap this afternoon with a serious case of bed head! ?

Happy Labor Day, friends! We’re over here looking ahead at the week like ? Today marks one week since we brought Mr. B home and we are so in love. We’re spending the day hanging out and integrating our newest fur ball with our four kitties. We’re curious- how many cats do you have? Let us know below!

Give the boy his catnip fish and a good brushing and this is what you get. Passed. Out. BeeJay. Good night, friends! ?

BeeJay the boss: Bring me coffee and bring me crunchies, stat! We love this photo of Mr. B hanging out in the Executive Director’s office of the Refuge last week. He’s certainly not shy about letting us know who’s the boss!

Here’s what people have to say about Mr. B

Um, if he doesn’t get adopted (highly unlikely) he’s welcome to join our K9 Unit as its first Feline (he IS a cat, right?!) member

so many people are applying, they crashed the website. I cannot stop laughing at this cat!

Please send my fond regards to Mr. B. Having myself gone from an animal shelter to the seat of power in the UK, I can only hope he ends up at the White House. And takes charge.

are you sure this isn’t…a baby cougar or something?

I had a chonk that was “both” and that boy lived a good long life. pic.twitter.com/1ORvEdmo1O

I can’t afford that much lasagna

What does he eat?

Just like Lucy the Bat Cat and Xherdan the Naked Cat, chonky cat Mr. B is proof that cats, despite their unusual appearance and size, are worthy of a loving home too.

Teach Kids About The Human Body With This Anatomy Apron

You Can Go “Glamping” In An Elevated Mini-Cabin In Spain

This Subreddit ‘Thanks, I Hate It’ Shares Photos Of Things You Just Cant Unsee