A majority of the population can’t function without their daily cuppa joe. Essentially, coffee acts like fuel for us caffeine-dependent mortals. Thankfully, there’s about a dozen different ways to enjoy this holy brew. Especially the latte, which we enjoy not just for its flavor but also for the gorgeous latte art that adorns the drink. And apparently, 21-year old barista, Irvine Quek Siew Lhek, makes the best latte art in the world. 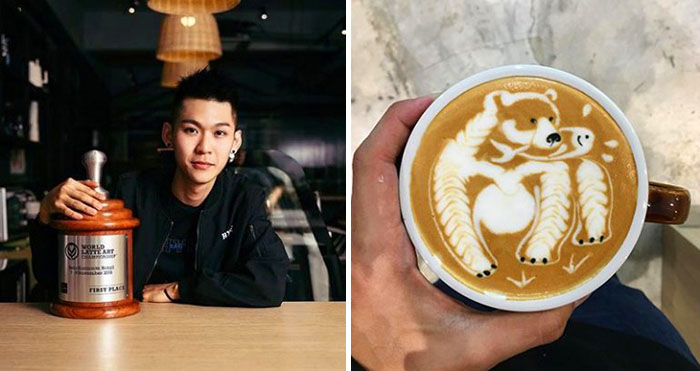 To begin with, he earned the title after winning the 2019 World Latte Battle held in Seoul, South Korea, using a design that he worked on perfecting for months. The Malaysian barista won the championship over South Korean, Kim Young Jin, with a 10-point lead. Quek bested his peers with the design he called “Bear’n Fish”.

Interestingly, latte art goes back centuries. And the practice of creating wonderful images using silky smooth micro foam hasn’t changed too much. However, the craft certainly goes through a lot of innovation, since baristas often make their own designs after perfecting the fundamentals.

Quek has five years of experience under his belt. His journey to becoming one of the most celebrated latte artists started when he was only 15 years old. At the time, he worked as a part-time employee for a Malaysian milk-tea chain shop. There, Irvin had the opportunity to gradually master the basic techniques of making coffee.

However, the budding latte artist became an official barista when he met the previous boss of 103 Coffee Workshop. Not long after, Irvin resolutely quit high school and focused on his passion for creating art on coffee. When asked about his motivation, he said,

“I just wanted to participate in competitions to prove my ability. The expression of latte art should be interactive. I need to know if my latte art conveys my inspiration clearly and makes customers happy.”

Becoming a Champion is Hard Work

According to Irvine, the journey to joining the competition wasn’t as easy as he thought it would be. He failed to win Malaysian contests and wasn’t accepted to the world championship during his first attempt purely because of his nerves! In fact, his passion for the craft grew more when he joined the Ristr8to World Latte Art Battle in 2017. Here, he got the chance to interact with his idol, Arnon Thitiprasert. “Arnon won World Latte Art Champion that year,” Irvine said. A year later, that title belonged to Irvine.

After winning the 2018 WLAC, Irvine immediately began creating new patterns upon returning home. “Before this, I had to take the rating scale into consideration. As a result, I had to give up the impulse to try many new ideas,” he said. It’s safe to say that the title’s definitely allowed him to enjoy more creative freedom. In just a short time, he had managed to whip up 15 new designs!

Irvine kept his title after winning this year’s WLAC championship. His winning design features a bear with a fish in its mouth. The design, according to the artist, took over 3 months to perfect. With the bear and fish so cleanly detailed, it’s not hard to see why it won top prize!

Additionally, Irvine has participated in 5 major latte art competitions since his debut in 2017. The 21-year old barista has certainly come a long way from being a milk-tea shop part-timer. So, his risky decision to eschew high school seems to have worked out for the best! Besides, why stick with the ordinary when you’ve figured out your true calling, right?

He’s combining fashion and coffee with his merchandise collaborations.

These days, he’s definitely enjoying the best of what life has to offer for a world latte art champion. Currently, the talented barista has 43,400 followers on Instagram. He officially announced his own brand, Nasty Jug, earlier this year as well. As of writing, Nasty Jug currently offers fashion items in collaboration with @hype_my. Finally, fans of the coffee art prodigy can get a set of ceramic mugs from the brand to enjoy, therefore having their own cup to practice their craft in. Irvine has also released an exclusive milk frothing pitcher for baristas to add to their collection.

Can you guess what he’s making in this video before he reveals it?

Just watching him masterfully pouring the milk foam soothes us. In other words, we could watch him do it for hours and feel nothing but awe. In conclusion, if you’re ever in Singapore, make it a priority to drop by 103 Coffee Workshop in Sri Petaling! Would you be able to sip and ruin their gorgeous latte arts? Tell us in the comments below!