We all have fond memories of our childhood summer days. And we’ll always associate those fun-filled days with colorful and sweet ice pops. They were way more affordable than ice cream, and they were easy to make at home. All we really had to do was mix our favorite juice, pour them in a mold and pop them in the freezer for a couple hours. Because of this association, ice pops have been dismissed as a childish treat. But if you’re like me, then you’re probably guilty of still enjoying these icy sweet treats and you’ll also love the Kool-Aid Freeze Pops!

Now you might be feeling a little confused, since this isn’t Kool-Aid’s first frozen popsicle offering. Kool-Aid’s been selling two varieties of Kool Pops for some time now. But the difference between these varieties lies in the flavors of the popsicles. The flavors included in the Kool Pops variety consist of a wide range of flavors from plain fruit flavors to tropical combos. In comparison to this, the Freeze Pops consist of the brand’s most popular flavors. 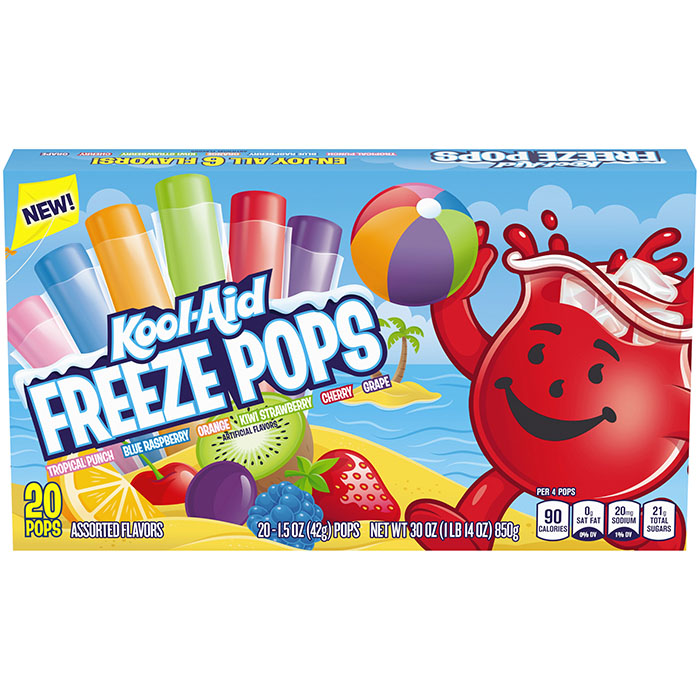 Cool off this summer with the Kool-Aid Freeze Pops

The new addition to Kool-Aid’s popsicle lineup contains 6 flavors compared to the Kool Pops, which only have 7. In this new pack, you’ll get all your favorite juice flavors in frozen form. So if you’re a fan of Kool-Aid’s Tropical Punch, Blue Raspberry, Orange, Kiwi Strawberry, Cherry and Grape, this popsicle pack is for you! These freezer popsicles are sheathed in clear plastic tubes that you can simply cut open to get to the sugary treat inside.

Several snack sleuths like @snackgator and The Impulsive Buy have spotted the new Freeze Pops in different stores. The Impulsive Buy was quick to wonder why the new variety isn’t called Kool Pops. We’re sure you’re wondering too. But it seems that the only way to find out is to buy a box for ourselves. Each box holds 20 popsicles, which means you’ve got plenty to spare to share! Walmart has already listed the item on their online catalog, however the product isn’t available for purchase online. You’ll only be getting 90 calories per 4 popsicles, so you won’t have to worry about your diet. I wouldn’t mind being called a kid-at-heart as long as I get to have a cherry Freeze Pop!