Home » Animals » The Harpy Eagle Is A Giant Bird – So Large, That People Often Think It’s Just A Person In A Costume

The Harpy Eagle Is A Giant Bird – So Large, That People Often Think It’s Just A Person In A Costume

Some birds have colorful plumage and sing sweet songs. These birds can easily make you feel a sense of glee and amazement that God created them so beautifully. And then… there are the ones that can scare the life out of you just by being there. Vultures, Crows, and Shoebill Storks have got nothing on this absolutely massive eagle that seems to have flown straight out of Stephen King’s twisted wonderland. The Harpy Eagle strikes fear simply by being present. With its majestic monochrome plumage and handsome but intimidating face, the Harpy Eagle is the prettiest and most terrifying bird we’ve ever seen. 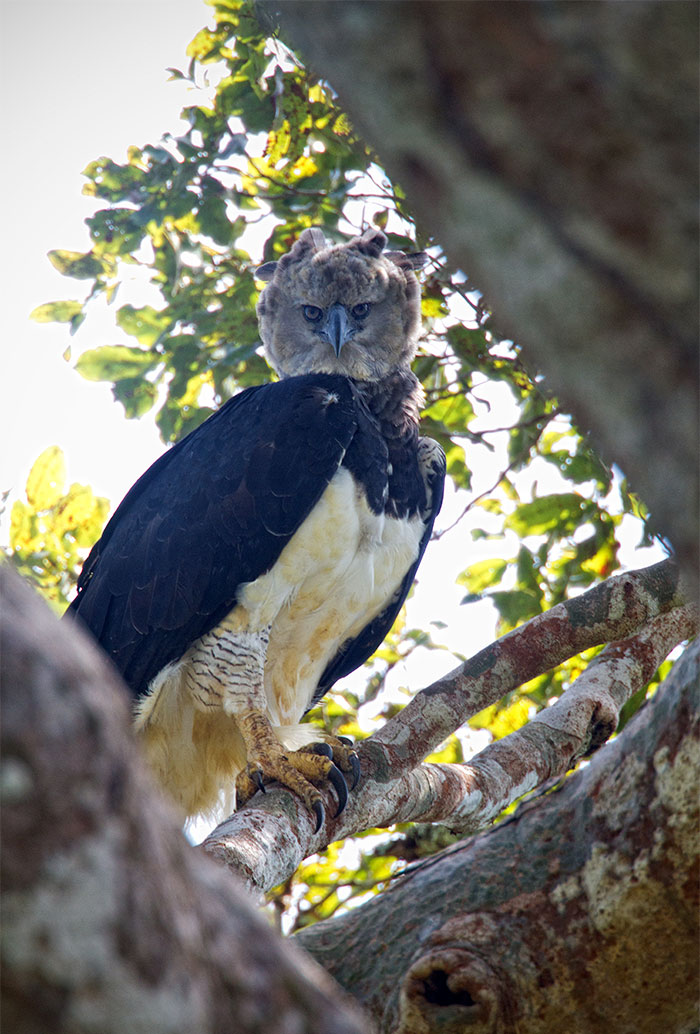 The Next Gen Scientist

The eagles are so enormous that their wingspan can reach up to 7 feet and 4 inches (224 centimeters). In comparison, the tallest man in the world stands at 8 feet and 11 inches (272 centimeters)! However, despite its size, they weigh only 8.5 to 20 pounds (3.8 – 9 kilograms). These eagles are considered the most powerful raptors not only in the rain forest, but around the globe! Its legs are as thick as your wrists and its supremely strong claws and talons enable it hunt heavy sloths or monkeys. Bald eagles, on the other hand, are only strong enough to catch waterfowl and small animals like squirrels, raccoons, rabbits, and prairie dogs. So due to the Harpy’s rather large prey range, these eagles can go for a week or two without going hungry.

Thanks to its uniquely unsettling appearance, the Harpy Eagle has become an Internet sensation. 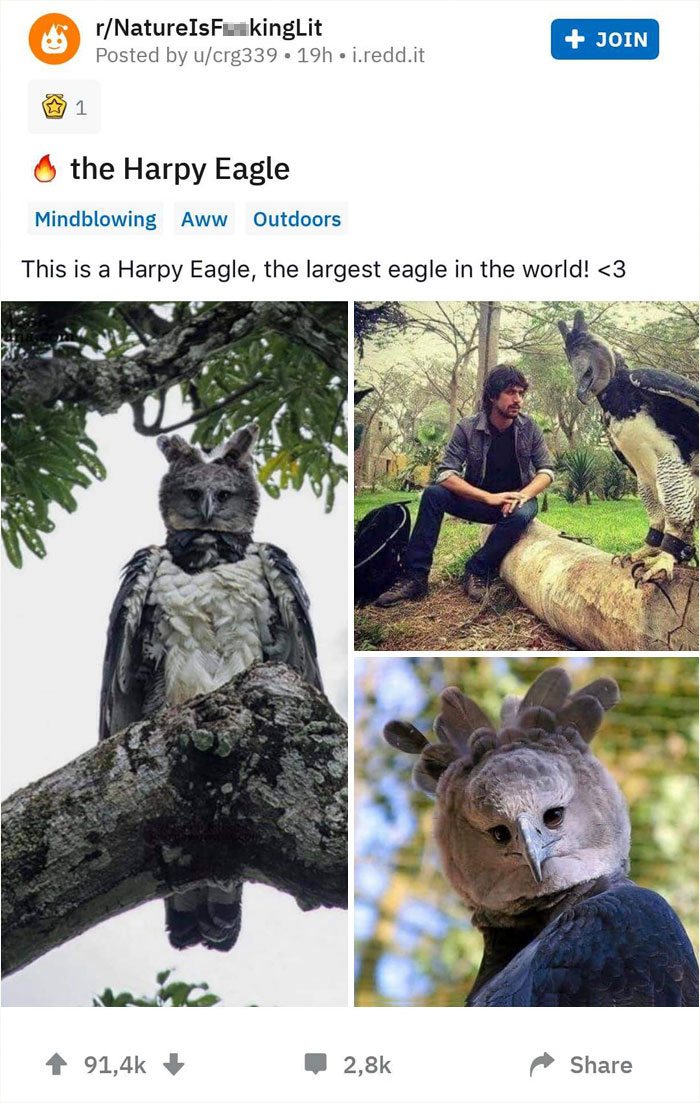 This Reddit post containing a compilation of the Harpy’s photos got over 91,600 upvotes within 20 hours. Naturally, the people of Reddit lost their minds and pointed out that the Harpy Eagle looks more like a man in costume than it does as a bird. At the same time, the image gained over 120, 000 views on Imgur.

The Harpy Eagle looks like it would fit right in at Jim Henson’s Dark Crystal II. 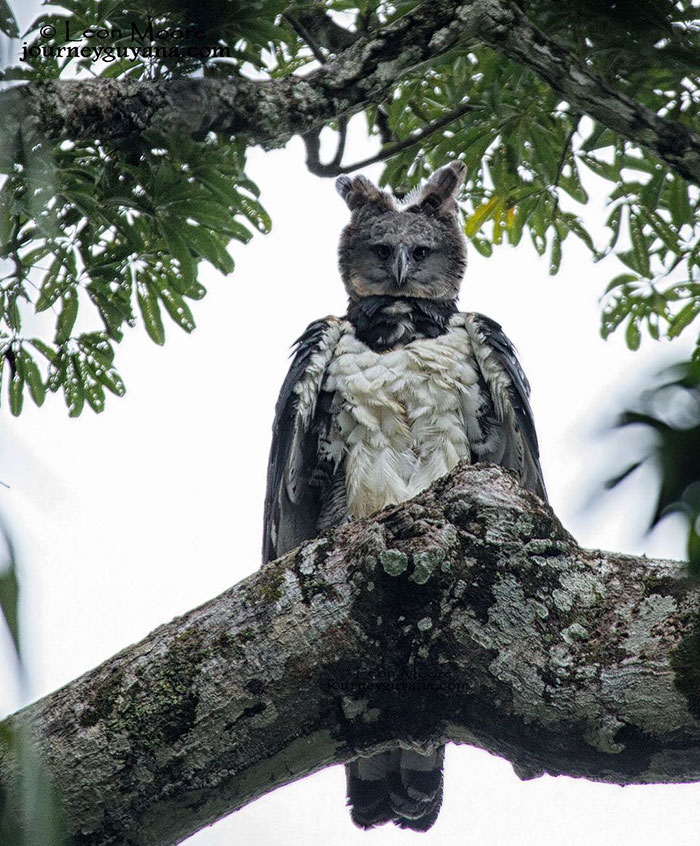 Is that a bird or a person wearing a bird costume? We can’t help but wonder if the Skeksis were based from the fascinatingly frightening eagles’ appearance.

With its eyes closed, it kind of resembles the Night King from Game of Thrones. 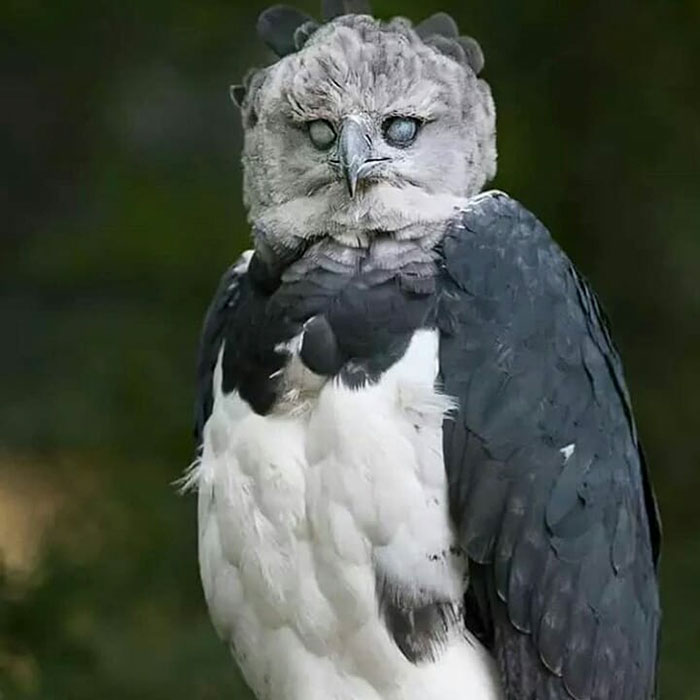 Harpy Eagles are diurnal, which means they’re active during daytime. They spend much of their time perched in trees when they’re not hunting. When they are hunting, the Harpies sometimes drop below the forest canopy to search for prey. And surprisingly, despite their impressive wing span, these hunters travel relatively slowly, choosing to move from tree to tree to scout any potential meals. 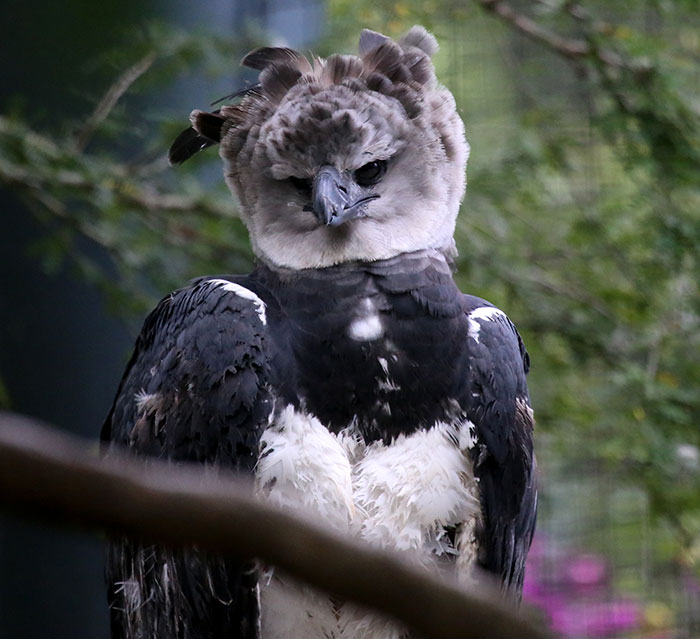 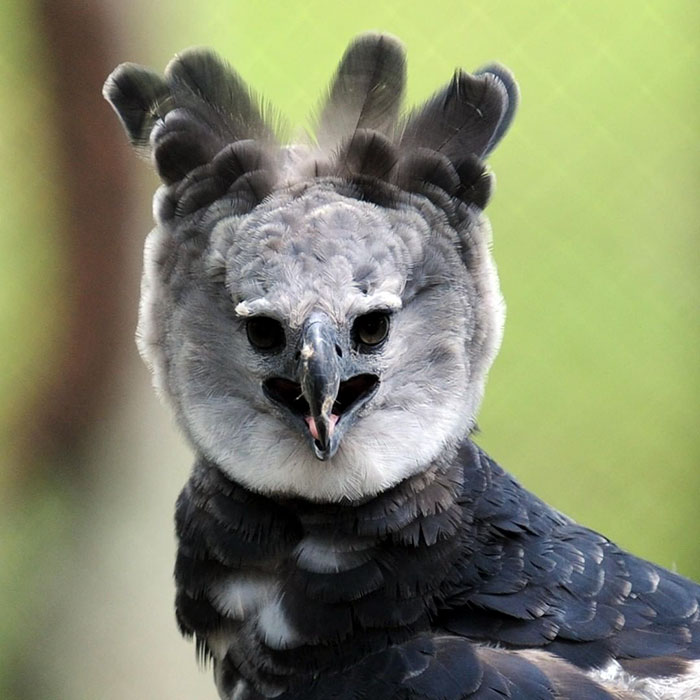 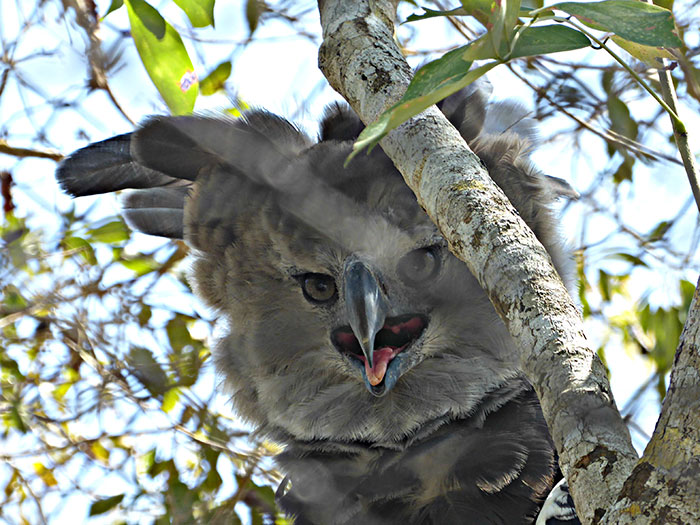 It has a gray head crowned with a double crest of feathers than fan out when the Harpy feels threatened or when it wants to preen. It’s definitely a fitting moniker! Plus, the outline of its eyes can rival any make-up artist’s eyeliner flick, for sure!

Harpies also have something in common with owls. 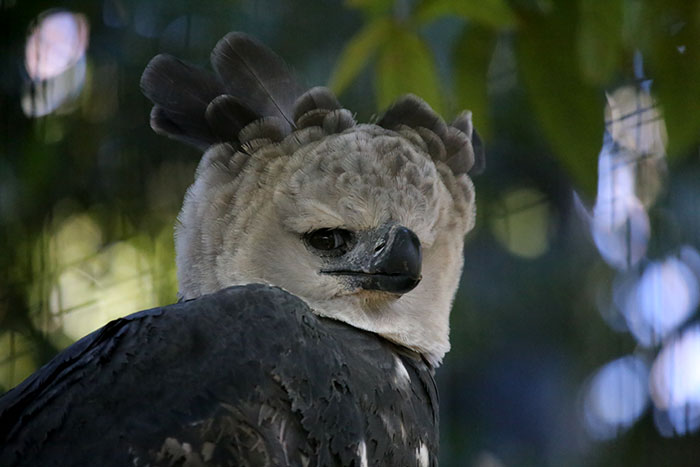 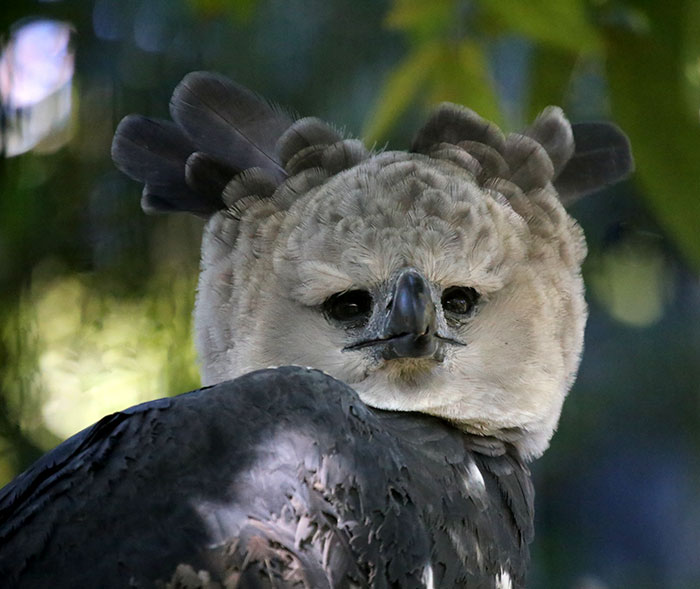 Harpies, like owls, have facial disk feathers, that can be lowered or lifted at will. This helps direct sound waves to the eagle’s ears. It helps them isolate and focus on a sound, which is very useful especially when they are hunting.

An adult hand can fit right into the Harpy Eagle’s claw. 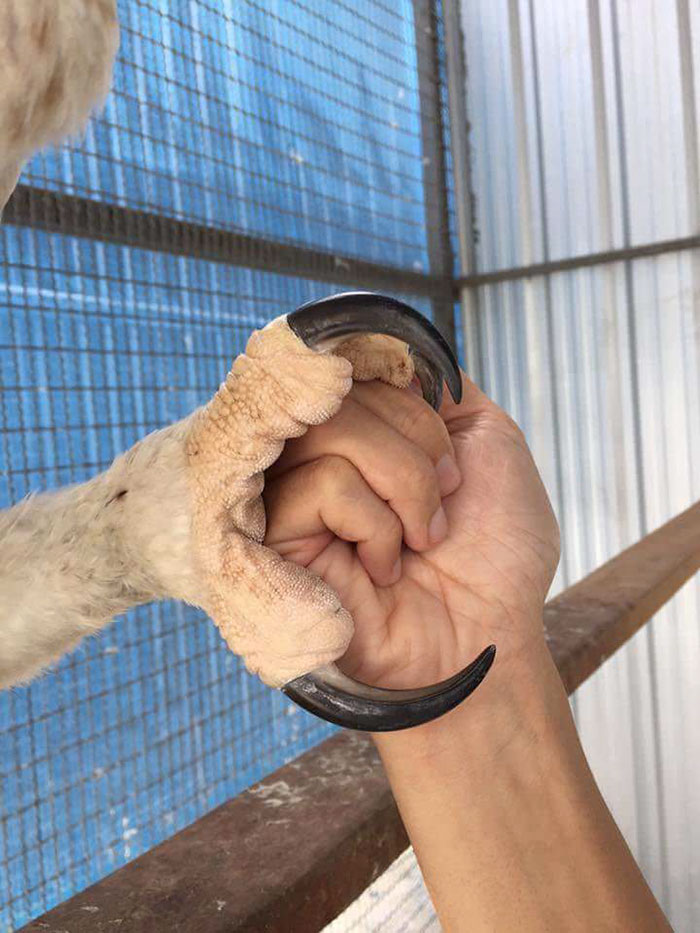 The Harpy Eagles’ claws are bigger than an adult human’s hand. No wonder it can pick up large animals for meals! Additionally, the adult eagle’s  talons grow up to 5 inches (13 cm). It’s even longer than the 2-4 inch claw that grizzly bears have on their front paws! The Harpy  Eagle’s legs and talons are so strong that it’s easily capable of exerting over 110 pounds (50 kilos) of pressure, which effectively crushes its prey’s bones. The proud eagle’s talons are comparable to a Rottweiler’s jaw when holding on to a victim.

Have you ever seen a bird look this handsome? 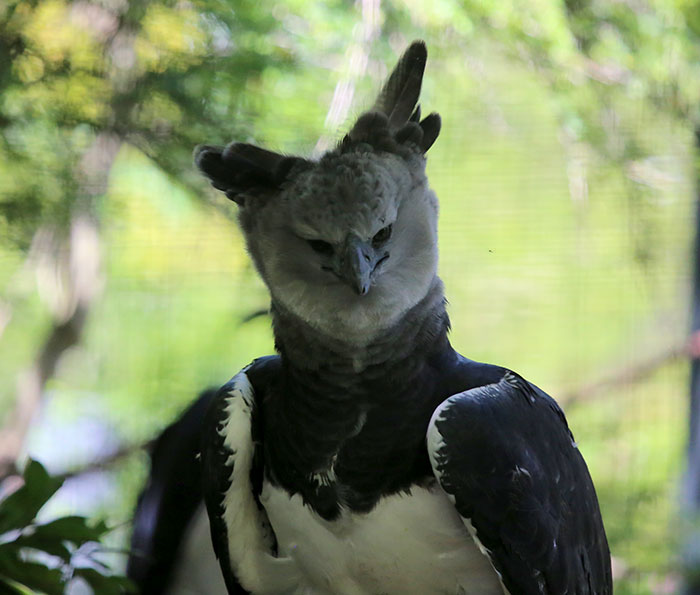 In this picture, the Harpy Eagle appears to be totally aware of his beauty. If another animated movie about birds gets made, we’re petitioning to have the Harpy cast as the debonair main protagonist (or antagonist!). 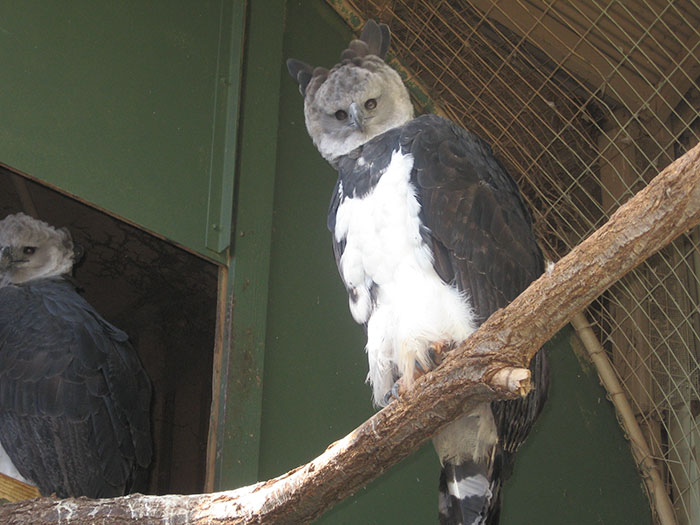 “It might seem that a bird as big and as strong as a Harpy Eagle would not need our help, but the truth is that large animals, especially predators, are sometimes the ones that become endangered first.” Peregrine Fund wrote.

People have hunted them for sport and now their population has dwindled enough to put them in the IUCN Red List. It is challenging to repopulate these birds, as they only breed every two years. Moreover, years of logging and deforestation have destroyed their nests and habitats. Because of these activities, this enormous bird’s world has become more and more cramped.

Redditors had a lot to say about the eagle.

The Harpy Eagle may look like something Jim Henson, Stephen King, or even Tim Burton would dream into reality. But they are very much real, and we need to do our part to make sure that they don’t go extinct. Because despite of its unsettling and fascinating appearance, this eagle plays an important role in the ecosystem. We’d rather see them live in peace in their natural habitat than to reign terror in the urban setting. Can you just imagine seeing a resting Harpy Eagle while you’re out for a late night walk/run? That’s the stuff of nightmares!