A woman in Louisiana has found herself expecting a very unusual guest this winter season: an elderly possum. Possums are immensely misunderstood creatures. They’re often mistaken as rodents, when they’re actually nocturnal marsupials. And while they may not match up to puppies and kittens in terms of cuteness, this particular marsupial’s tale has certainly charmed many. More importantly, this little story has allowed others to shed some light on this elusive creature’s truth.

DamnDirtyCracker shared the touching anecdote of Hank’s warm welcome at his aunt’s garage. According to him, Hank has frequented his aunt’s home for a couple years now, looking for cat food. Slowly, the possum appeared to realize that no danger would come to him there, so he began to stay longer and longer. Finally, the Redditor said that Hank “just decided he was going to take up residency in the garage”.

With the possum’s visits becoming more frequent and more extended, the Redditor’s aunt realized that the marsupial had begun treating her vast garage as a sanctuary. And so, she decided to fix a cozy place for him to sleep. She also left him some treats, just in case. 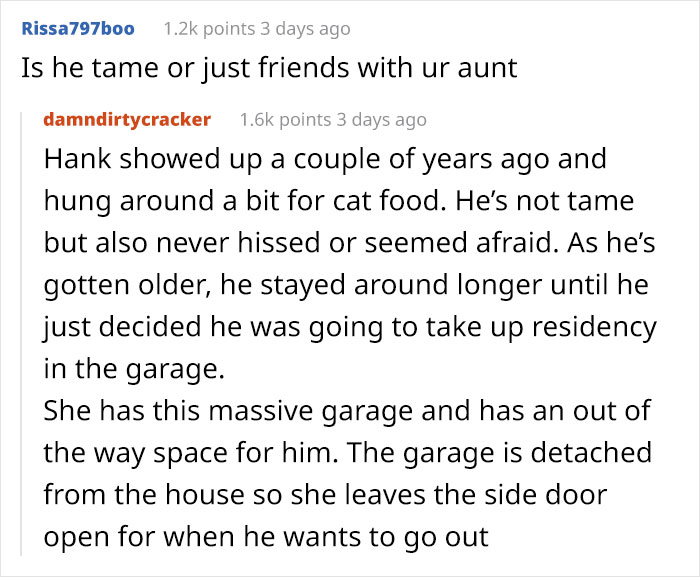 The Redditor also went on to explain that their aunt’s garage is massive, and that Hank’s got a tiny spot all to himself. The garage itself is detached from the house, so there’s little chance of Hank suddenly moving in with them at the main house. Besides, they’re not considering to keep him as a pet, even though he’s pretty tame for a wild animal. He’s never hissed or seemed afraid of being seen by humans.

Now most folks would say that harboring an undomesticated animal at home isn’t the smart decision. As we have said, possums are unfortunately often mistaken as oversized rats by unwitting homeowners. However, thanks to DamnDirtyCracker, others have come forward with information and anecdotes of their own that show what lovely creatures they actually are.

In the comments, people pointed out that leaving possums to do their thing is a great way to keep ticks and other pests under control. According to them, possums can eat up to 1,000 ticks. If you’re wondering how possums manage to catch that many ticks, the answer is simple. Possums groom themselves constantly and any tick that falls automatically becomes a snack. Aside from ticks, they also like eating mosquitoes, cockroaches, slugs and even venomous snakes! Talk about a big appetite!

This possum has earned his retirement

Possums only live for 2 to 3 years, so Hank may not be around for long. This may be part of the reason behind the Redditor’s kind gesture. Now that we know all the good things that they do, wouldn’t you agree that this elderly possum has earned his comfortable retirement?

Check out how people reacted to Hank’s story: 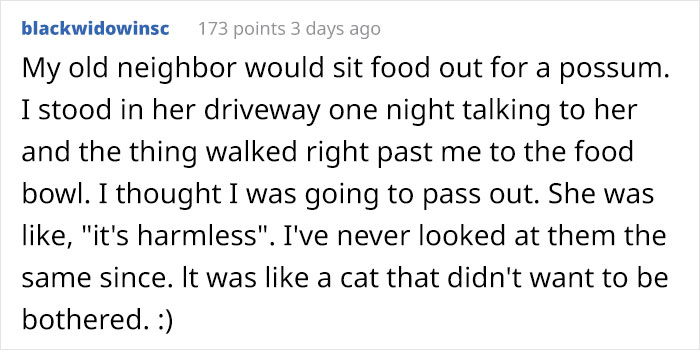 Others shared some cool trivia about possums

This user certainly learned something

We certainly see opossums in a new light thanks to this heartwarming story. How about you?