All hail our feline overlords – cats are territorial creatures and we all know that they rule the world. So once they’ve claimed something or have marked their territory, you can’t do anything about it. A couple recently made a rather curious request to a popular blender brand, asking for 3 empty Vitamix boxes for the sole reason that they’ve lost a fight against their 3 feline masters. So, how did the cats forced the couple to make this strange request? Jessica Gerson-Neeves shared their hilarious story on Facebook through an open letter addressed to the blender-manufacturing company.

Jessica started the letter by introducing herself and her partner Nikki. The couple ardently call themselves ‘devoted servants’ to 3 cats named Max, George: Destroyer of Worlds, and Lando Calrissian. But Jessica fondly refers to them as ‘sentient soccer ball’, ‘sentient dust bunny’, and ‘sentient potato’ respectively. Jessica revealed on her letter that she has a chronic disease that makes it difficult for her body to process fiber. So, a good blender would be necessary to aid her digestion. Furthermore, she said that her wife loves smoothies and they have been planning to get a Vitamix blender for years.

They finally got the chance on Black Friday sales and purchased a Vitamix blender on Amazon after Thanksgiving Day. When they received the item on the 16th of December, the couple was so excited to unbox the product. But the moment they set the box down on the kitchen floor, Max jumped right up on top of it before they could open it. And that’s how their predicament started. 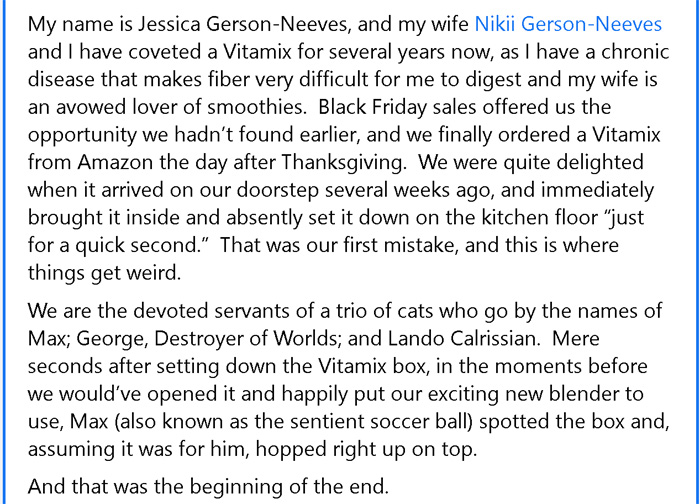 Jessica documented their stand-off with their cats on a series of Facebook posts complete with pics and shared the story on the Facebook page This Cat Is Chonky. Apparently, the 3 cats seemed to have claimed the box by sitting on top of it in rotation, not giving their humans the chance to even touch the coveted box. The stand-off has been going on for two weeks and the cats aren’t showing any signs of abandoning their post. Some of the commenters suggested that they request another similar item from Vitamix. But of course, Jessica knew that would too much of a request. 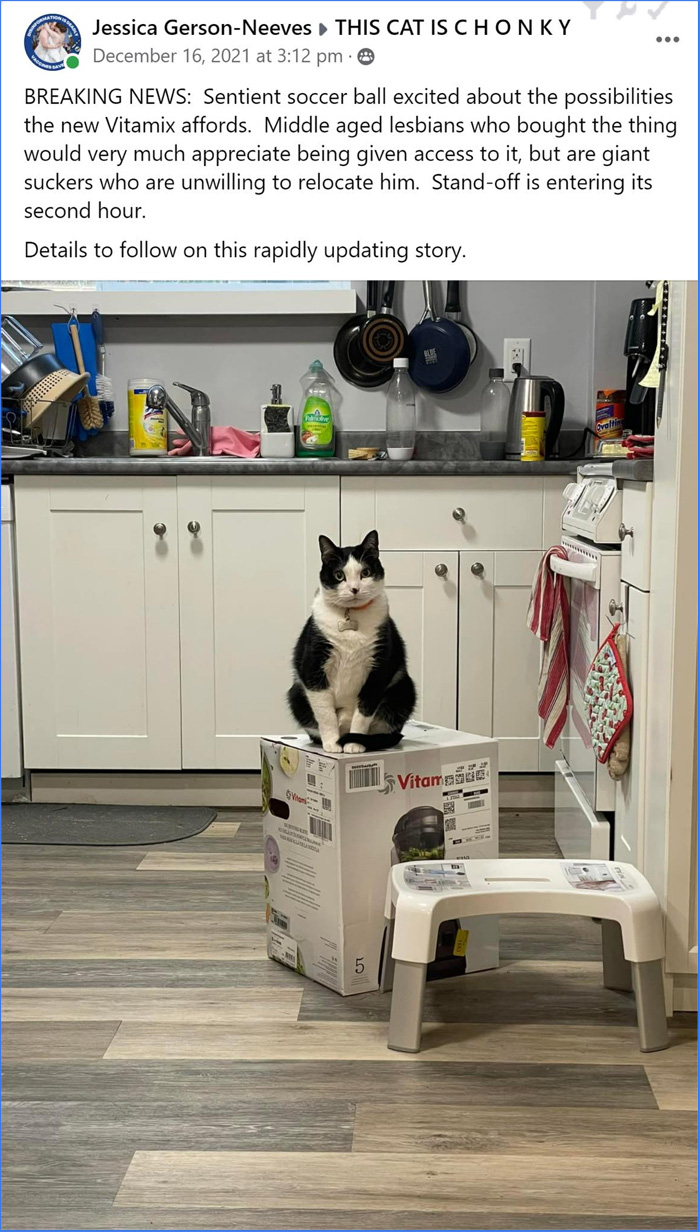 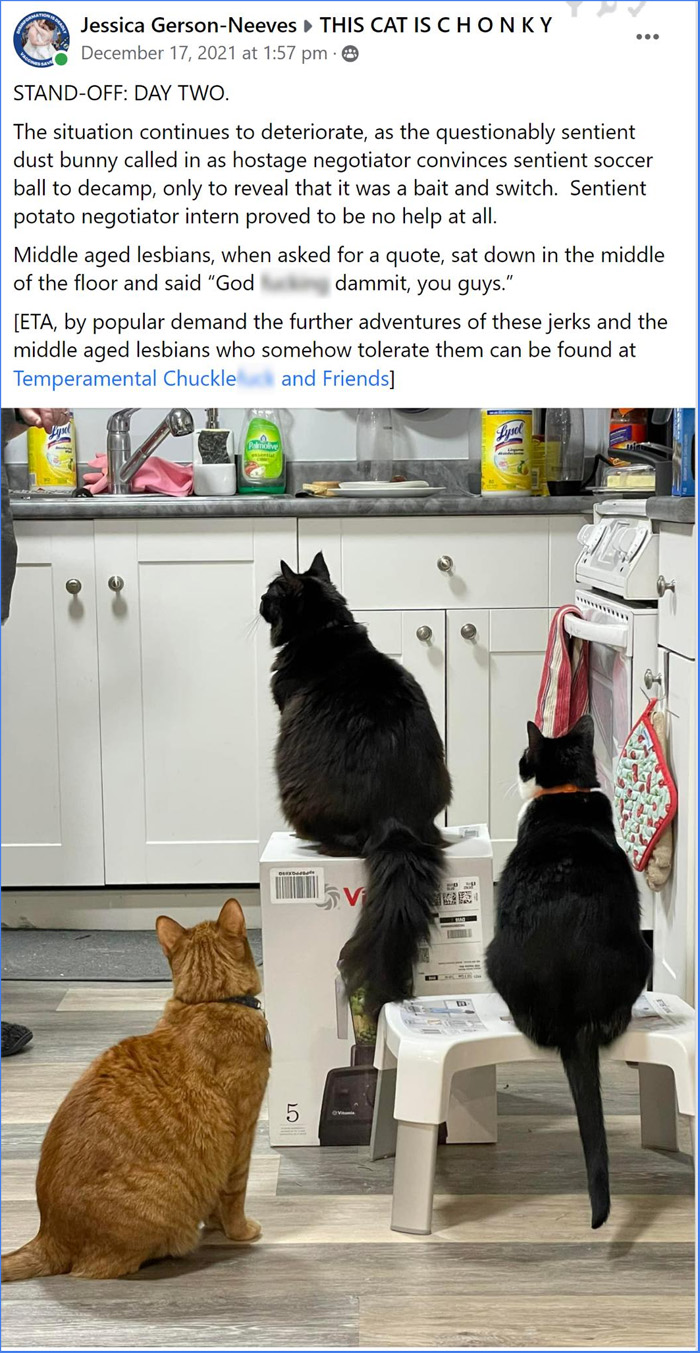 Instead of asking for an additional blender, Jessica decided to ask for empty boxes – the same one that their cats have claimed as their own. So, she went on and wrote an open letter to Vitamix in Canada Facebook detailing the embarrassing situation they’re in. The blender company responded, of course. And here’s what they have to say about this intriguing request. 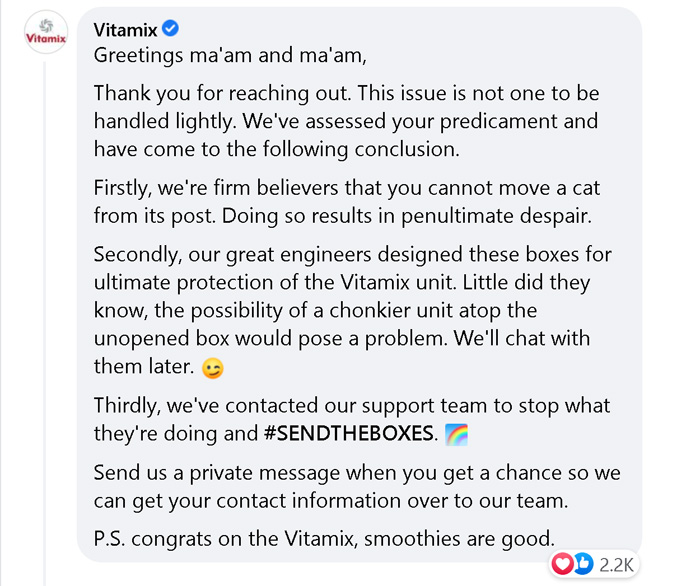