The ocean is the home of many mysterious creatures and atypical life forms. Moreover, 71 percent of the earth’s surface is covered in water. In other words, the oceans may be concealing various deep sea creatures that are still unknown to us. The ocean is indeed filled with mystery. And a brilliant contemporary artist went on to add more mystery to it. If you pay a visit to the Loire estuary, the tidal mouth that separates Saint-Nazaire and Saint-Brevin-les-Pins on the west coast of France, you’re likely to find an astonishing creature washing up on the beach. A massive skeleton of a giant serpent surging out of the sea.

The giant serpent skeleton is an art installation as a part of the Estuaire permanent public art collection along the 60-km estuary. Needless to say, the enormous remains of the giant serpent is just a sculpture and is not real. The art installation was called Serpent d’océan and was completed in 2012 by a French contemporary artist Huang Yong Ping. It measures 425 feet long and installed on the beach where it appears with the tide. Yong Ping cleverly made use of the ocean tides and made it an essential part of the art installation. In high tides, the sculpture is buried and concealed within the water. But when the water level decreases, the giant serpent emerges as if it had just been found in an archaeological dig. It was certainly a remarkable piece of art.

But why a giant serpent among other sea creatures? Yong Ping is a Chinese-born artist and is one of the most famous Chinese avant-garde artists in the 1980s. He is best known for his massive installations that mostly feature East-West perspectives. Unfortunately, the Chinese government found his artworks politically inappropriate and banned many of his works. This forced him to move to France in 1989 and later became a naturalized French citizen. In Chinese culture, the serpent is one of the 12 zodiac animals and is considered the most enigmatic among them. Being the symbol of mystery, divination, acumen, and malevolence, the artist picks a giant serpent as his subject for this art installation.

Moreover, the aluminum serpent sculpture has a curving spine that reflects the shape of the nearby Saint-Nazaire bridge. Its thin, whip-like tail smoothly cuts through the water as if it propels the serpent’s body toward the shore. Furthermore, algae has started to cling to its surface and little by little, the sculpture will be home to marine fauna and flora.

As a matter of fact, the Serpent d’océan is not the only serpent-themed sculpture by Yong Ping. In 2016, he created an even larger serpent sculpture measuring 787 feet as a piece for his Empires exhibition. This exhibit was the last part of the Monumenta series at the Grand Palais in Paris which started in 2007. And the exhibition of a behemoth serpent skeleton is indeed the best way to conclude the acclaimed Monumenta series.

In his Empires exhibition, Yong Ping created another giant serpent sculpture as a part of the Monumenta series 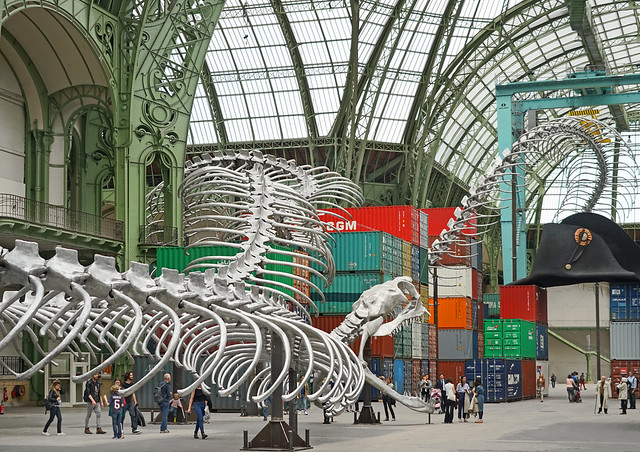 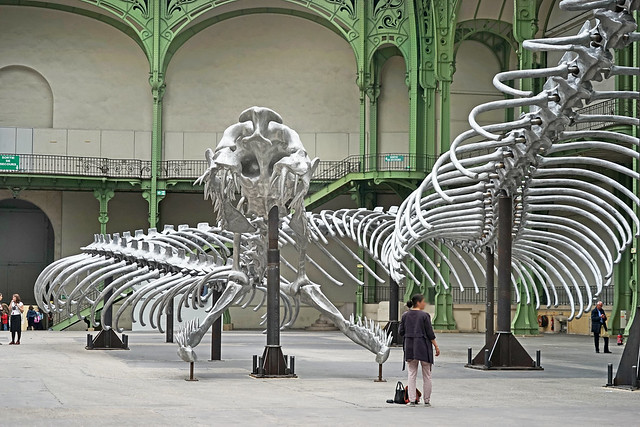