It’s a known fact that Keanu Reeves is one of the few gems of the entertainment industry. Aside from his exceptional acting skills, he also often received praises for being one of the nicest guys in Hollywood. And just recently, the 57-year-old actor has yet again proven that he’s worthy of the title, as he gifted each of his John Wick stuntmen a Rolex watch as a thank-you gift.

On October 24th, Instagram user @talesfromlordrodney took to the online platform to share a photo of Reeves happily dining at Bistro Paul Bert in Paris with some friends. As it turns out, the actor was in the company of his four stuntmen—Jeremy Marinas, Dave Camarillo, Li Qiang, and Bruce Concepcion.

Apparently, the team recently finished filming for the fourth chapter of the John Wick film series which is set to hit the theaters in May 2022. So, the actor invited the crew out to dinner, during which he presented each of them a Rolex Submariner watch as a token of his appreciation.

Released in 2020, the luxury watch model reportedly retails for about $10,000 each. On top of its hefty price tag, each watch also features a personalized thank-you message from the actor. One of the stuntmen, Marinas, shared a sneak peek of the fancy timepiece on his Instagram Story and wrote, “Best wrap gift ever.” He also revealed the special engraving at the back of the watch which reads, “The John Wick Five,” plus a thank-you note from the actor personally addressed to him.

Naturally, people online gushed over the actor’s extravagant gifts to his stuntmen. But more than that, they also praised him for his extreme kindness 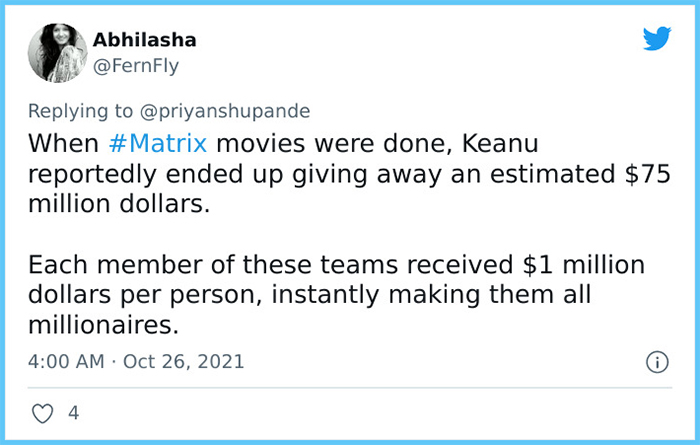 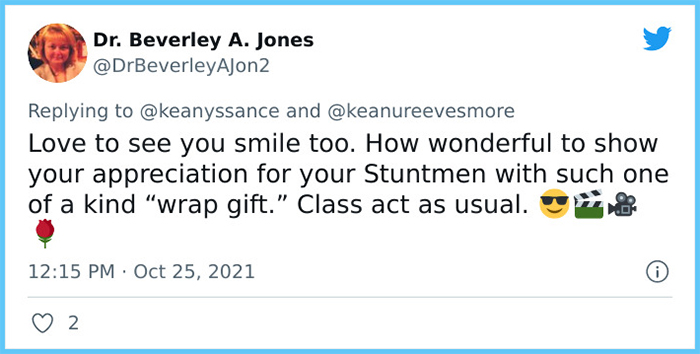 Indeed, as public figures, celebrities are often subject to scrutiny, both on and off camera. And while most of them have made a name for themselves for their excellent on-screen performance, only a handful have managed to make the news for their commendable character in real life. Well, Reeves is undeniably one of them, and that’s why people have high regard for him, both on-screen and in real life.