Each letter is actually part of the number 8.

Notice the cutlery for bones.

The tent is also a book.

If you haven't noticed already, the logo is of a hand and a bear.

The M has been separated to look like a bird flying off.

Yes you guessed it. It's not just a fork.

The BarCode logo is of a barcode (obviously) and a glass of beer which represents the Bar part of the name.

The pink brackets and dot in between show a pregnant belly.

It's not just a cup of coffee. Look a little closer and you will notice it's also a magicians hat. 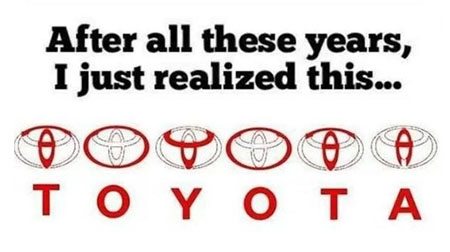 All of the letters of Toyota are inside the logo itself.

This logo has the letters TUI hidden in it.

The N is a 2 sideways which represents the number for twins.