For butterflies, nothing can be more miserable than to have a broken wing. Luckily for them, butterfly wing repair is now possible. Butterfly wings are very fragile, making them prone to breakage and damage. With a broken wing, a butterfly is probably never going to fly again. It can, however, live. The good thing is, there’s still a way to make it fly again even with a torn wing, provided that the condition is just a minor cut. One way to do a minor repair is to make the wings even by cutting them. Don’t worry, cutting its wings won’t hurt the insect. But take note that this procedure isn’t applicable for wings with severe damage. That’s exactly the case with this poor Monarch butterfly from a local zoo. 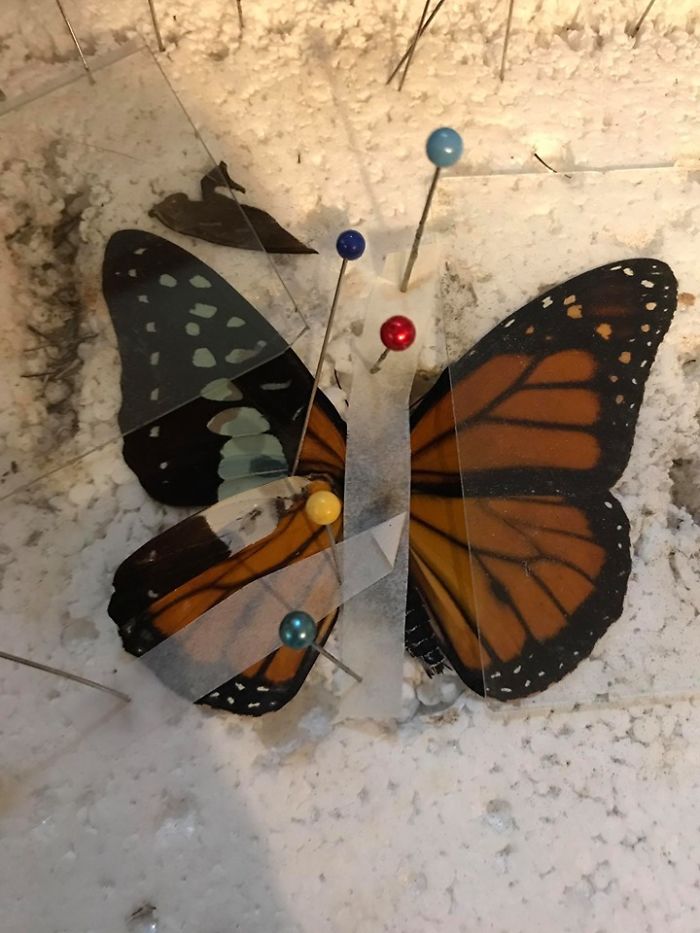 Deformed out of its chrysalis, this particular Monarch butterfly came out with impaired wings, making it unable to fly. Needless to say, this young butterfly hasn’t been able to fly since it came out from its chrysalis. The zoo immediately sought the help of Katie VanBlaricum, the artist behind the Etsy shop Insect Art. Katie specializes in creating jewelry and custom works that are made with real insects. But in November 2013, she made her first attempt on butterfly wing repair by making a wing transplant. One of her monarchs was accidentally stepped on by her dog. Thankfully, the butterfly was alive but one of its wings received heavy damage. Katie decided to make a wing transplant and it was indeed successful. In the afternoon of that same day, the butterfly was released and flew away into freedom. 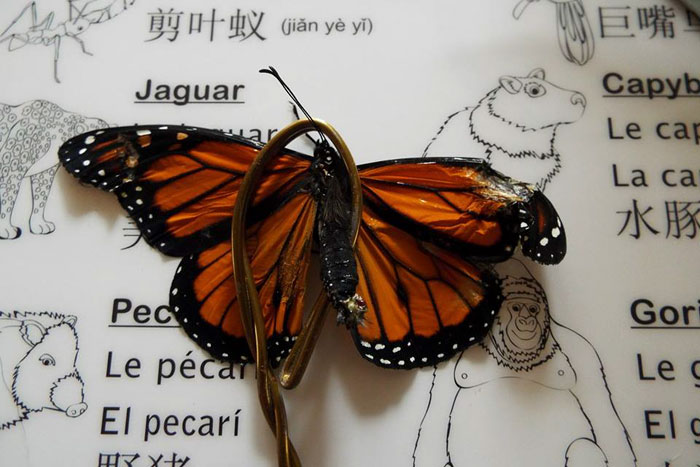 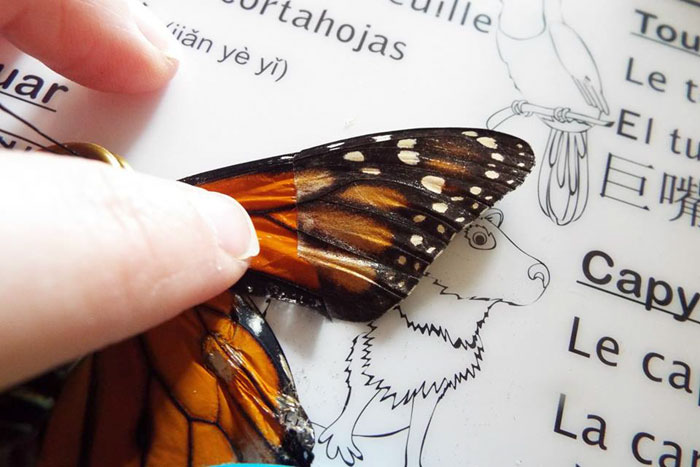 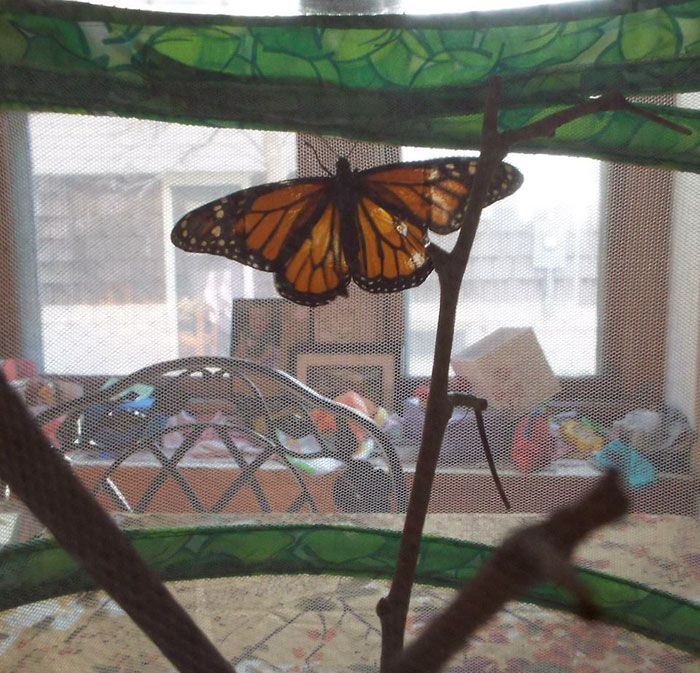 The success of Katie’s butterfly wing repair through transplant prompted the zoo to bring the monarch to her. Determined to repair the deformed butterfly, Katie went ahead with the transplant as can be seen on the step-by-step procedure below. 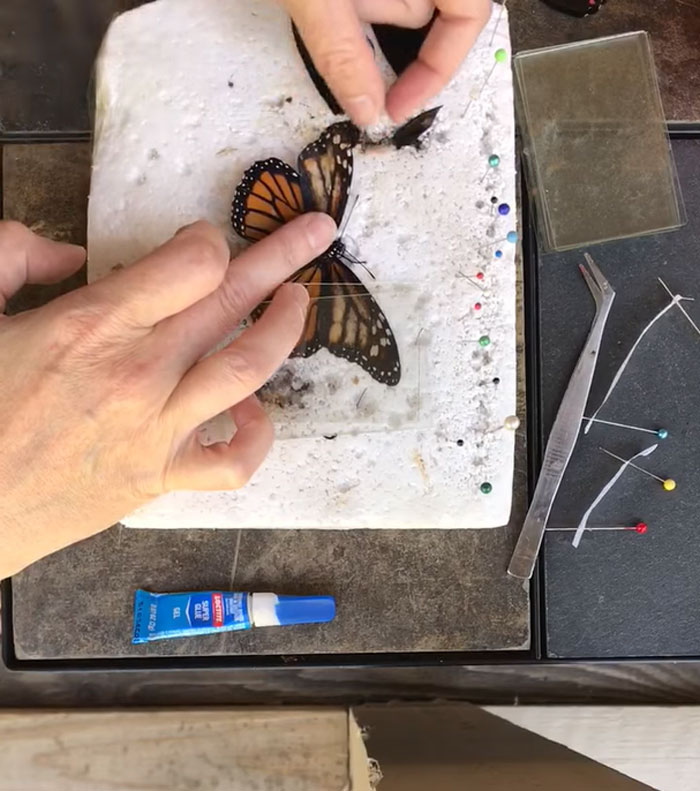 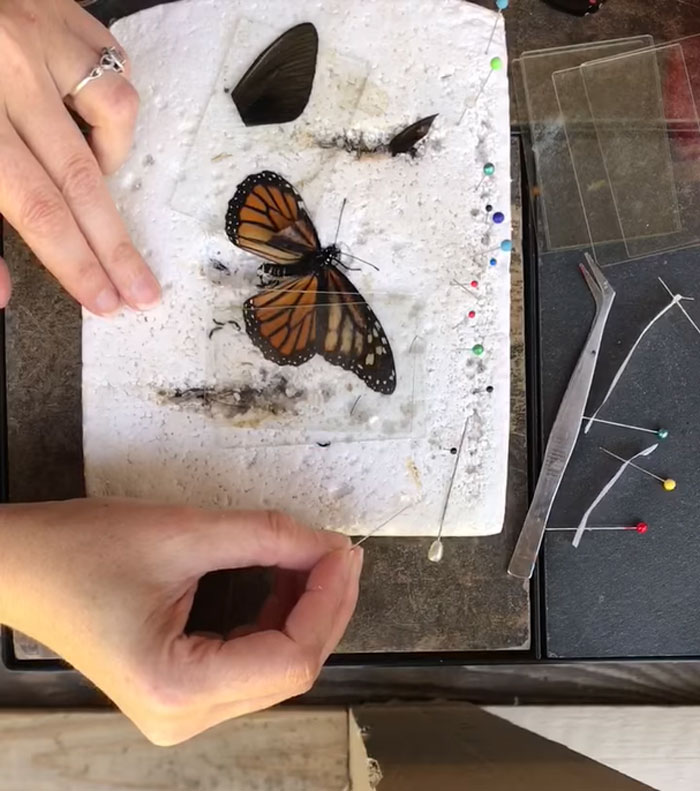 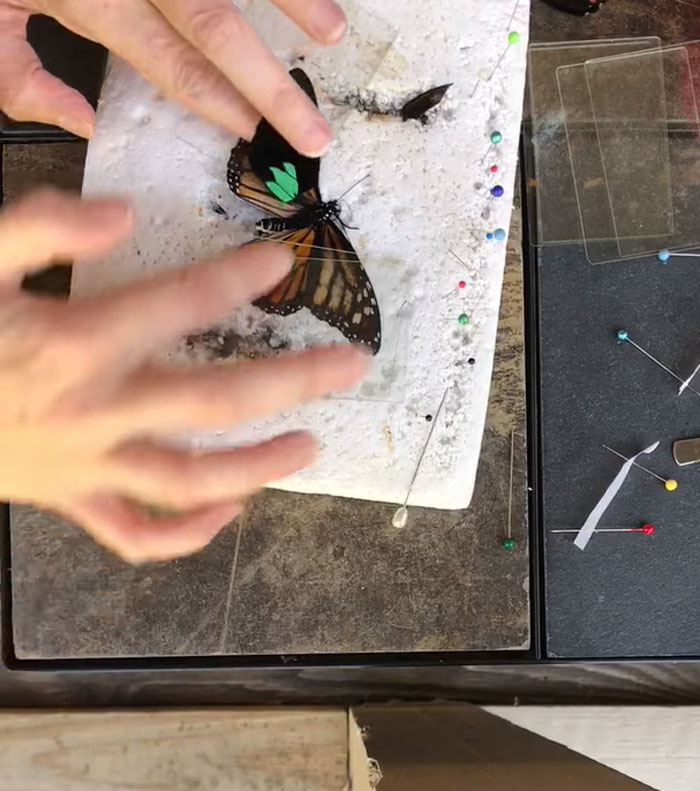 “It is not difficult for me to repair the wings since I work with dead insects for a living.”, Katie shares. “It takes me less than 5 minutes to do the repair. You have to work fast, to avoid stressing the butterfly out any more than necessary.”

Watch the full video below

Butterfly Wing repair video, at your request. Honestly, this is probably the worst job I have ever done on a live butterfly (new wing isn’t perfectly straight), but it will show you how the process is done, so you can try it yourself if you ever have to. 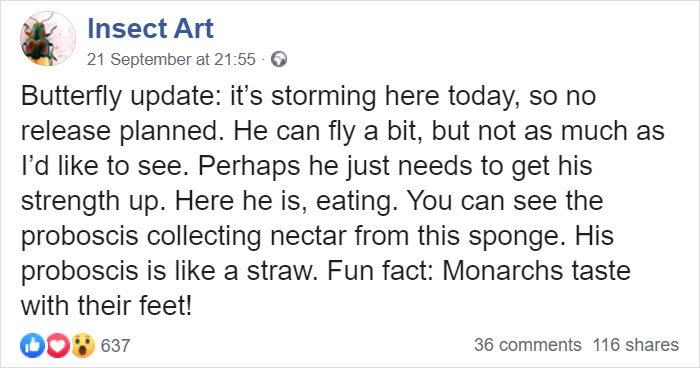 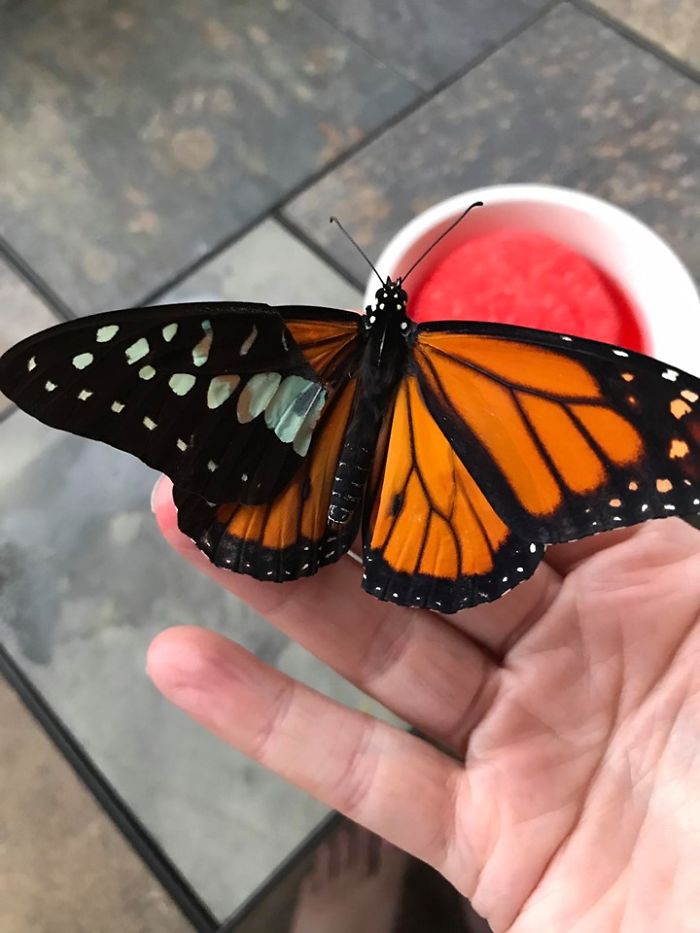 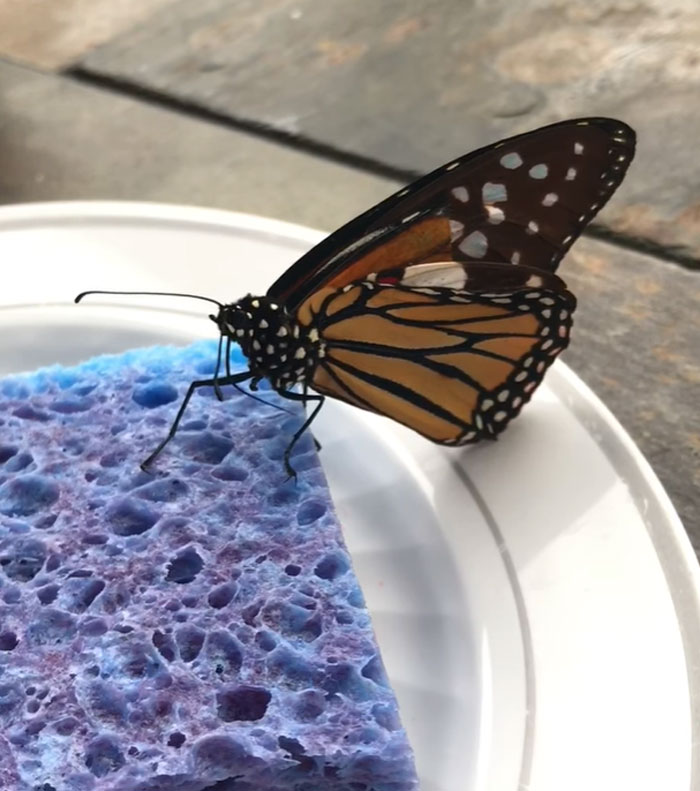 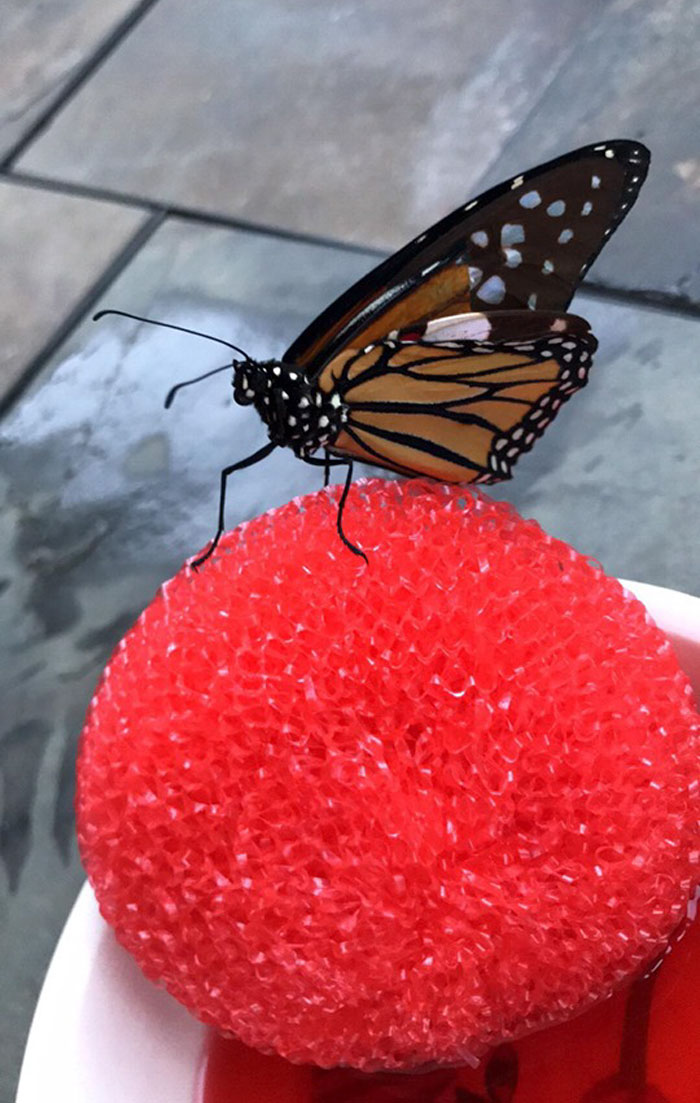 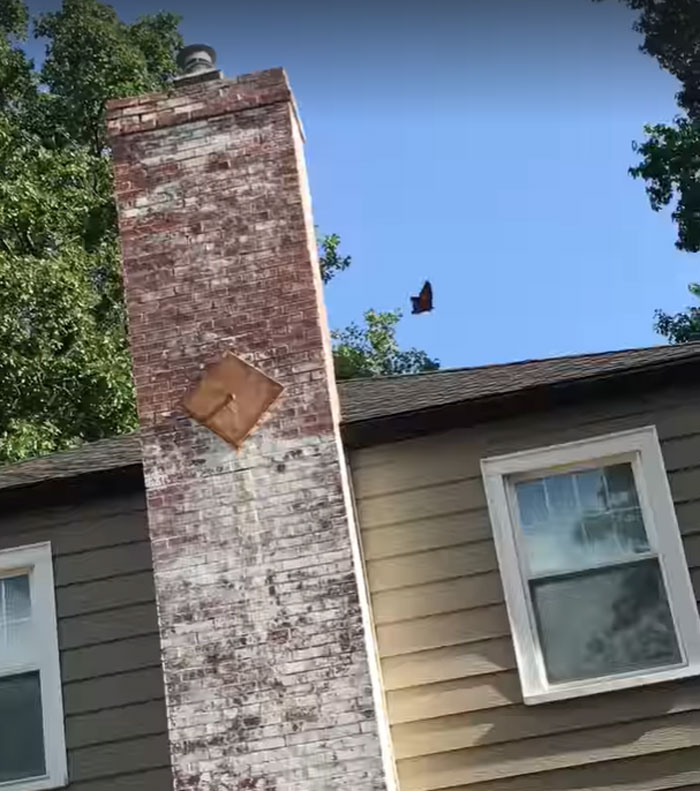 Butterfly update: the repaired Monarch got away from me today! Flew up high in an oak tree, so he’s off. Godspeed! (I had been taking him to some flower gardens outside, to see what he could do. Until now, I had always re-captured him and brought him back home.)