The greatest key to a successful and wealthy life is hard work. But luck also plays a big part. Some of the richest businesspersons in the world owe their success to hard work and luck. But they still firmly imply that perseverance will eventually bring in luck that will lead to success.

However, there people who are just too lucky to find hefty fortunes by sheer accident. The world is indeed full of hidden treasures waiting to be discovered. And if we’re lucky enough like these people, we can become instant millionaires in the most unexpected ways.

Here are 9 accidental discoveries that would make you think how lucky these people can get. 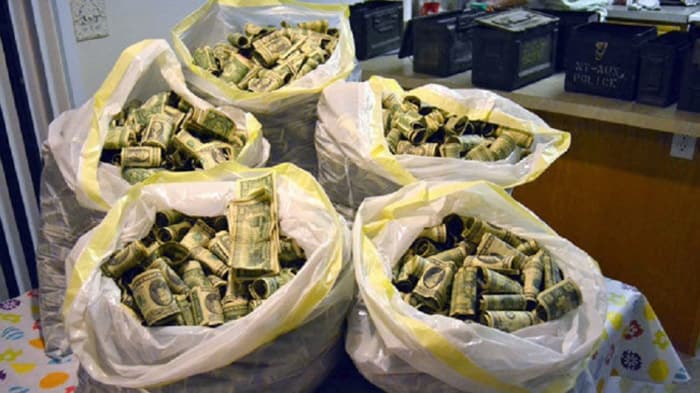 An artist from Utah just bought a new house, but little did he know that there was a hidden treasure tucked away somewhere in his new home. He was about to organize his tools in the workshop when he noticed some carpeting sticking out of the ceiling. When he pulled on it, a little access panel to the attic opened. There he found seven dusty ammo boxes containing rolls and rolls of dollar bills. He decided to return the treasure amounting to $45,000 to the rightful owner and he called the previous owners of the house to tell them about the surprising news. The previous owners claimed the money, saying their dad must have saved the money and tucked it away where no one could see it.

8.   Treasures hidden in an old chair 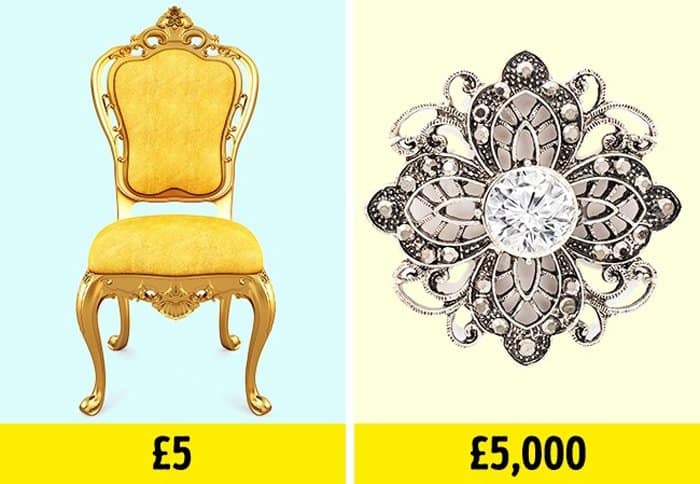 A Scottish couple needed a new chair but with a tight budget, they’ve decided to buy a secondhand chair from an auction for £5 ($7).  They used the chair for 4 years until they noticed its upholstery wearing away. Lacking money for repair, the chair was stocked in the attic and it stayed there for 6 years until the husband finally decided to fix the chair himself. When he lifted off the upholstery, he discovered a pair of diamond earrings, a diamond brooch and a diamond ring securely hidden inside. All in all, the discovered treasure is valued at £5,000 ($6,650).

7.   A classic Ferrari found in a garage 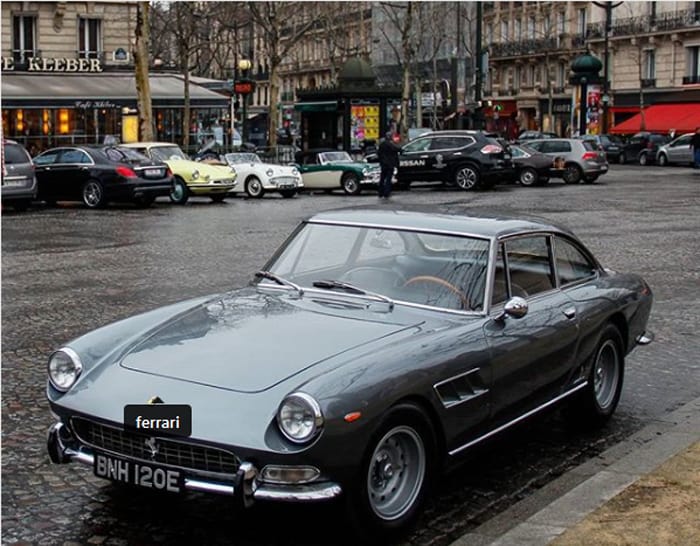 A man in Wyoming bought a house for $285,500. While he was checking out the garage, he discovered a 1996 Ferrari 330 GT that is almost unrecognizable because it was entirely covered with thick dust. The classic luxury car was in perfect condition which he later found out was valued at $500,000. 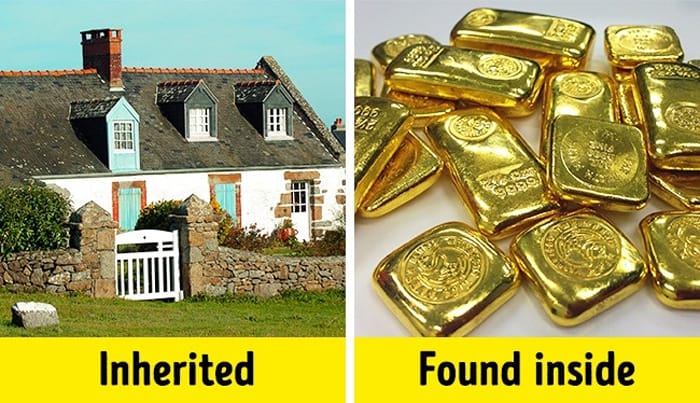 In Normandy, a French man inherited a house from a deceased relative. When he started to inspect the house for the first time, he was surprised to discover that the house he inherited was a haven of treasures. At first, he found a small box full of gold coins fastened to a chair. He later found more gold hidden in a whiskey box. The new owner almost lost his mind when he found out several gold bars hidden under furniture, in the bathroom, under stacks of linen, almost everywhere inside the house. There were about 5,000 gold pieces, 37 ingots of 1 kilo, and two bars of 12 kilos in general which has a total worth of $3.7 million. Unfortunately, the man has to pay 45% inheritance tax and 3 years in back taxes. But still, gaining a million dollar in a day for doing nothing isn’t that bad at all! 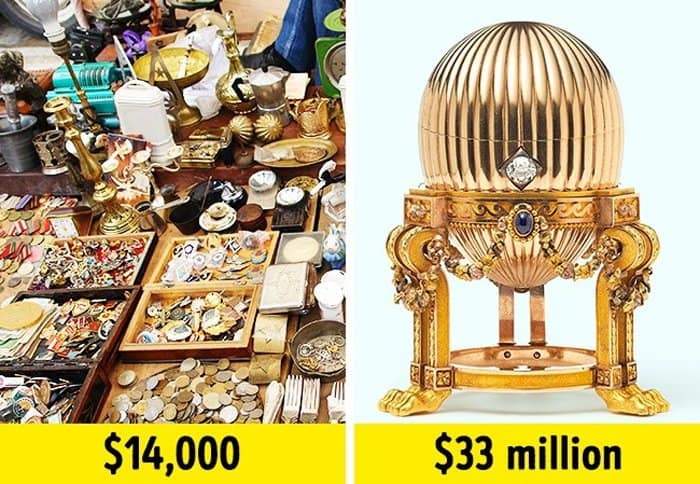 An American man purchased a metal egg with gold contents and pearl pieces inside for $14,000 from a flea market. The scrap-metal dealer who sold the artifact did not realize its value. He thought he was lucky enough to sell an item he bought from a house in the Midwest where he found it displayed on the kitchen counter. If he would had known that he had his hand on a genuine Faberge egg, he could have been $33 million richer by now.

A couple decided to donate their 110-year-old piano to a Shropshire college, not knowing that there’s a secret treasure inside it. When the school called in a technician to tune the newly-acquired instrument,  they found 7 bags filled with sovereigns under the piano keys with an estimated value of $640,000. Unluckily for the previous owners, the reward would go to the finder and the owner of the treasure. In this case, the piano technician found the treasure inside a piano owned by the college. 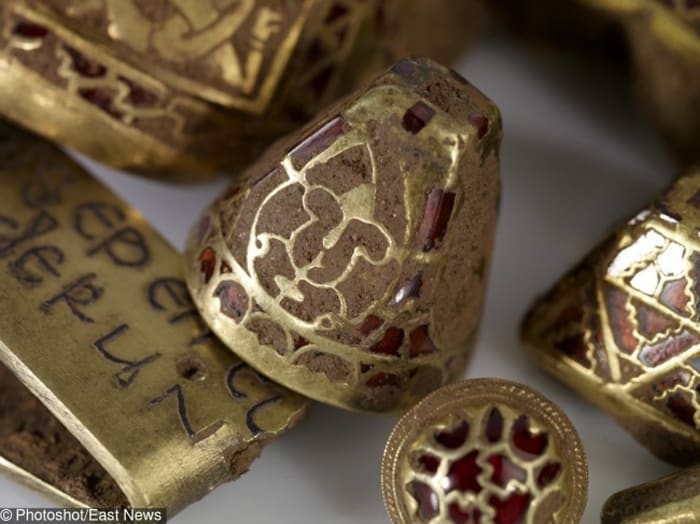 A farmer in Staffordshire was using a metal detector on his backyard to look for his daughter’s ring that she lost. Unfortunately, he didn’t find his daughter’s ring. But he was more happy with what he found instead. A hoard of more than 1,500 golden and silver pieces dating from the 7th century with an estimated value of $5 million. 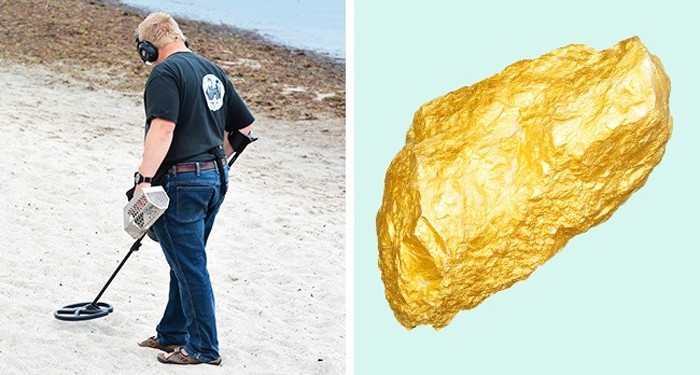 An Australian prospector was walking near Ballarat with a metal detector when he saw a glint of gold buried in the bushes. He thought it was a bonnet of a car at first. But when he started digging, he found a gold nugget weighing 11.5 lb (5.5 kg). The rare nugget is worth $300,000. 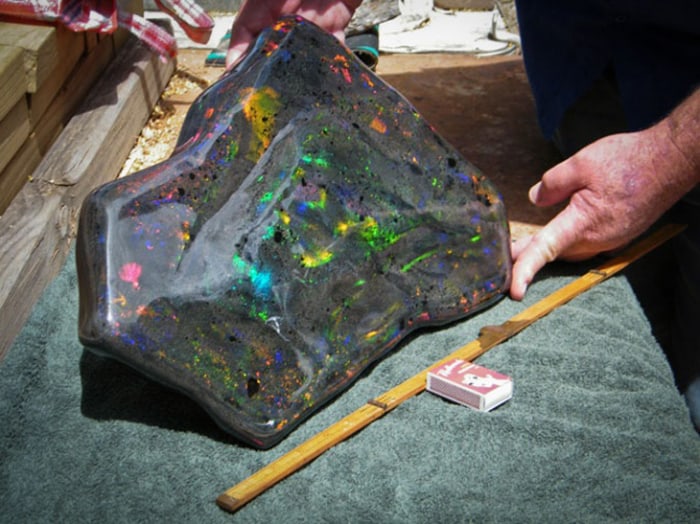 Stuart Hughes of Liverpool and his associates discovered an incredible stone having 55,000 carats (25 lb) of pure opal. It was the world’s largest opal matrix ever discovered with an estimated value of $1 million.