2019 is the year that marks the Berlin Wall 30-Year Anniversary. In commemoration of this event’s tricennial the city held many events. These events covered topics such as the wall’s construction, Berlin’s division, the Cold War, and the Peaceful Revolution of 1989. The Berlin Festival Week kicked off the celebrations with several exhibitions held at key locations throughout the city. Among these commemorative displays was an installation by Poetic Kinetics. This display featured over 120,000 streamers floating over where the wall once stood. 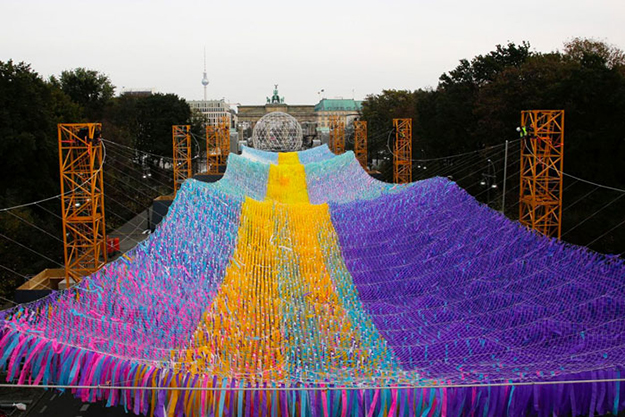 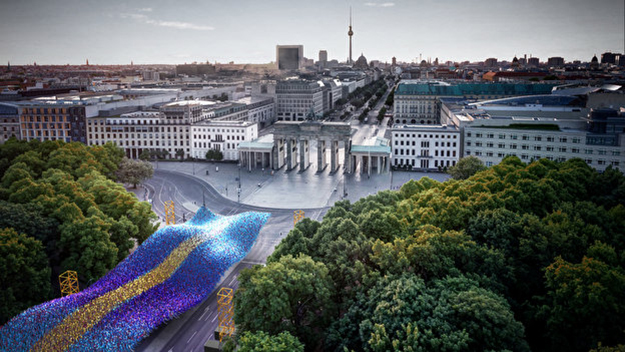 In contrast to the fallen Berlin Wall that comprised of reinforced concrete, Poetic Kinetics’ Visions in Motion installation simply floated and danced wherever the wind blew it. It is like a waving flag to signify the Peaceful Revolution’s triumph. 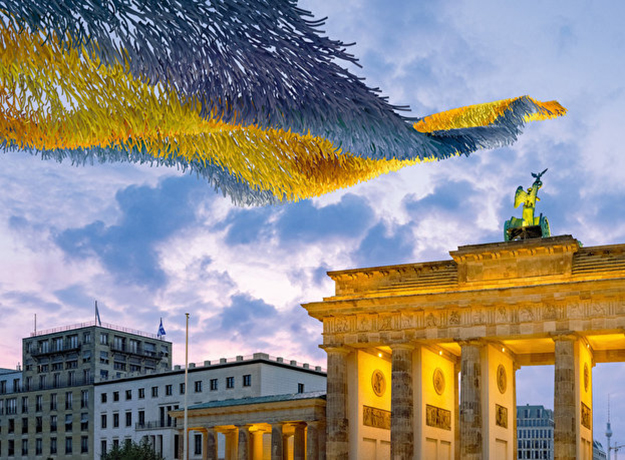 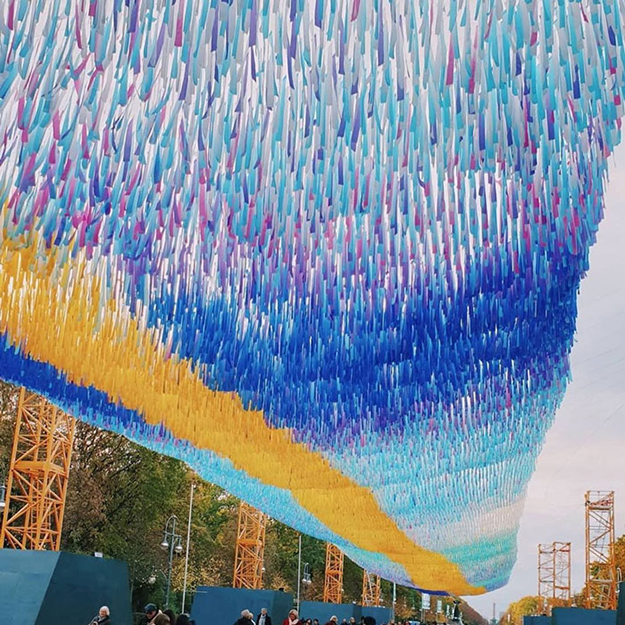 Patrick Shearn and his team at Poetic Kinetics made Visions in Motion. The artist is world renowned for his striking, larger-than-life kinetic sculptures. This prompted Kultureprojekte Berlin to invite them to participate in the monumental celebration. Kultureprojekte Berlin is a non-profit organization that works towards promoting, networking, and teaching Berlin’s art and culture. Visions in Motion is the latest addition to Shearn’s Skynets series. 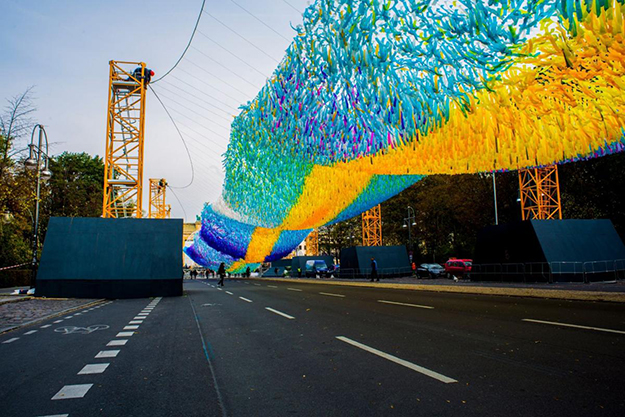 Shearn’s art installation shares some similarities to the Peaceful Revolution. 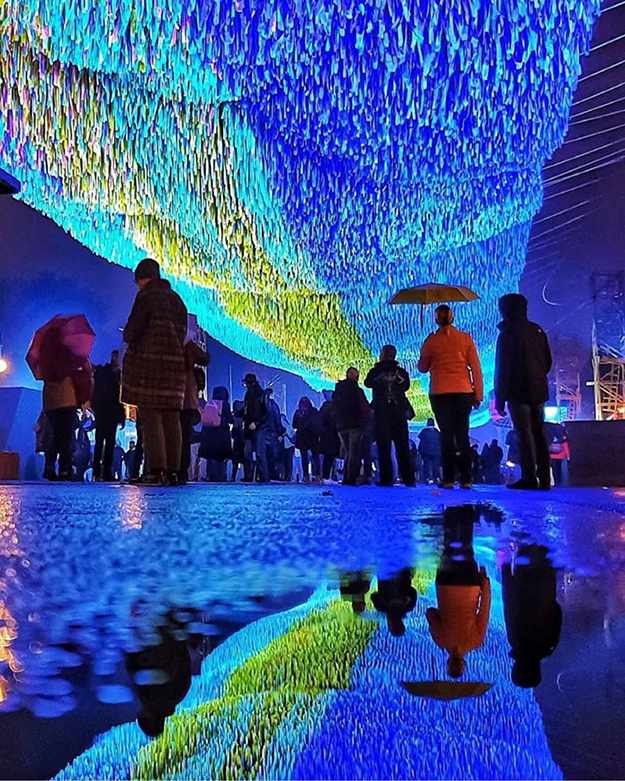 When the people raised their voice as one in protest, they paved the way for the Berlin Wall’s fall. Thirty years later, Shearn’s Visions in Motion has risen over where the wall used to be. The installation reflects the festival’s celebration of the German people’s unification.

How Was The Berlin Wall 30-Year Anniversary Installation Made?

From August 31 to September 25, Kulturprojekte Berlin collected messages from the public. The messages came from Berlin and the international community. Each message is on a special strip of ribbon that Kinetic Poetry would include in the art installation. During the campaign, Moritz van Dülmen, CEO of Kultureprojekte Berlin, said: 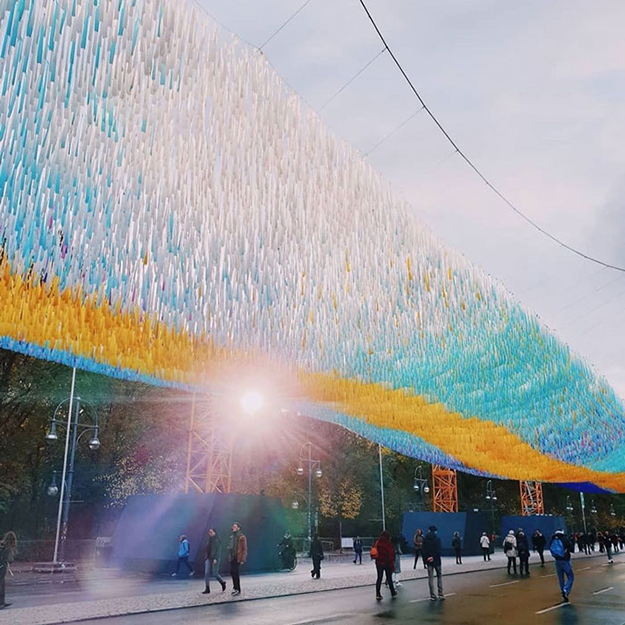 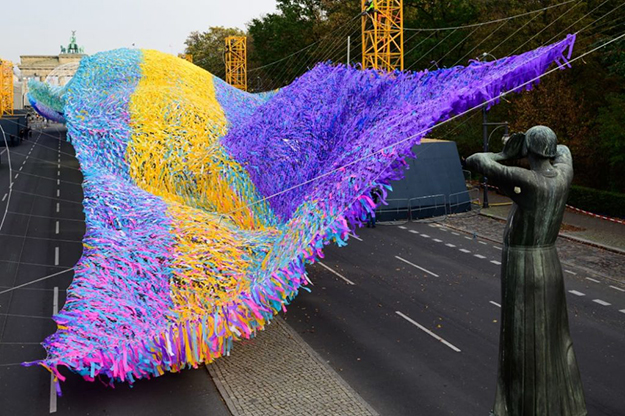 “In memory of the thousands of people who courageously raised their voices 30 years ago, today we would like to cordially invite everyone in Los Angeles to share their memories, messages, and thoughts on the future. Everyone can participate!” 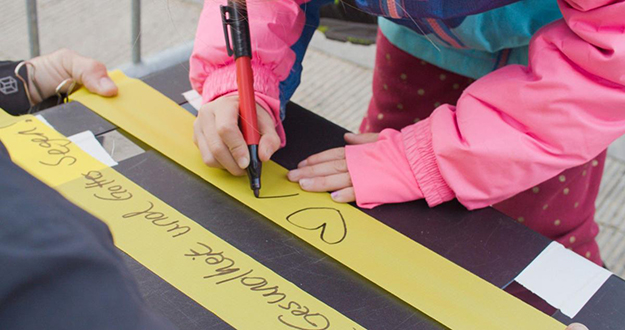 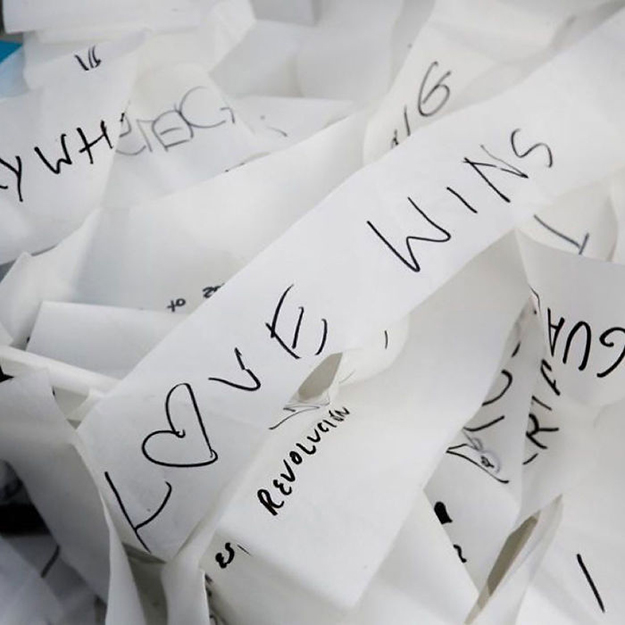 After collecting the messages, Poetic Kinetics flew the work from LA to Berlin. Once the work arrived in Berlin, the team collaborated a German engineering company, Then Nawrocki Alpin began to set up the installation. 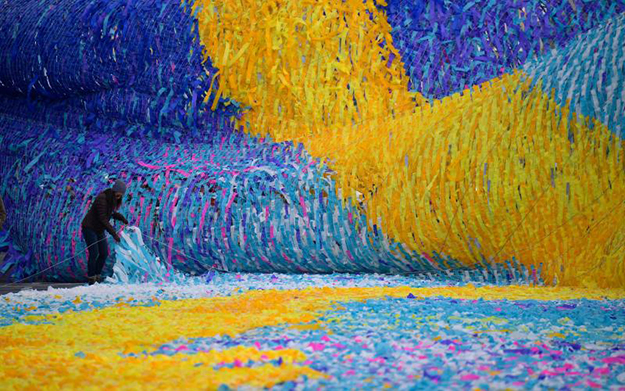 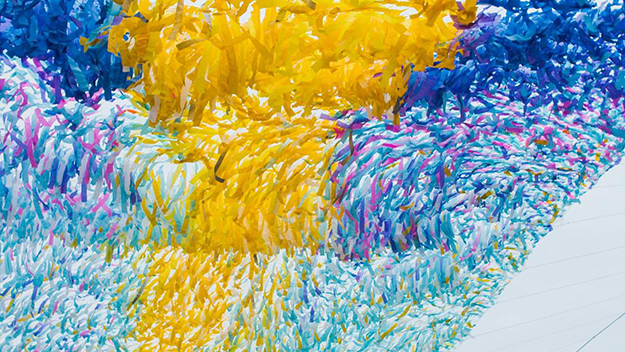 The massive installation comprises of 120,000 ripstop nylon fabric streamers. 30,000 of them contain handwritten messages of hope, remembrance, and greetings. To put it all together, Shearn’s team used around 9,500 linear feet of rope and 1250 hand-tied technical knots. In total, the massive kinetic art installation measures around 20,000 square feet and spans 450 feet in length. The installation starts at Brandenburg Gate where the former Wall divided the city. 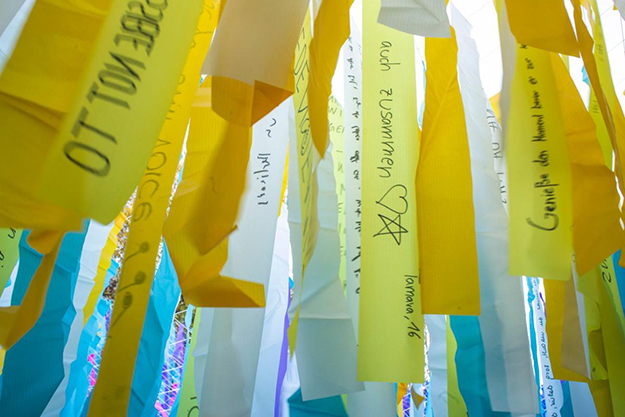 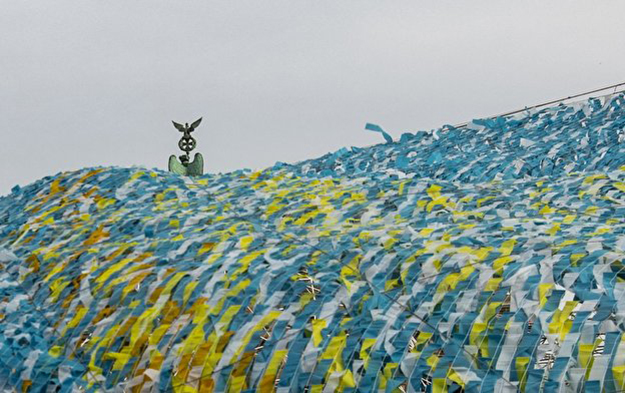 “Patrick Shearn is particularly inspired to lend his work to this auspicious historical event and intends “Visions in Motion” to be a symbol for peace and the united power of the people overcoming injustice.” 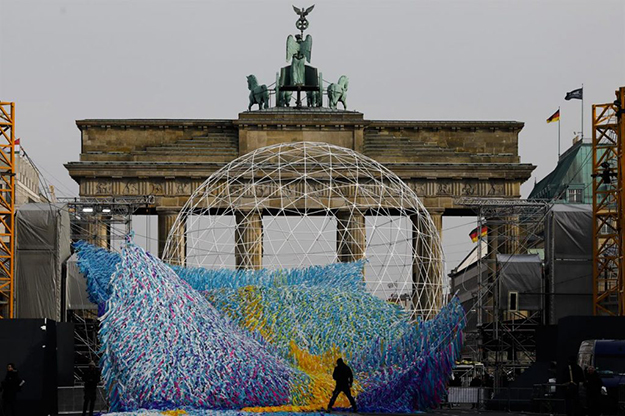 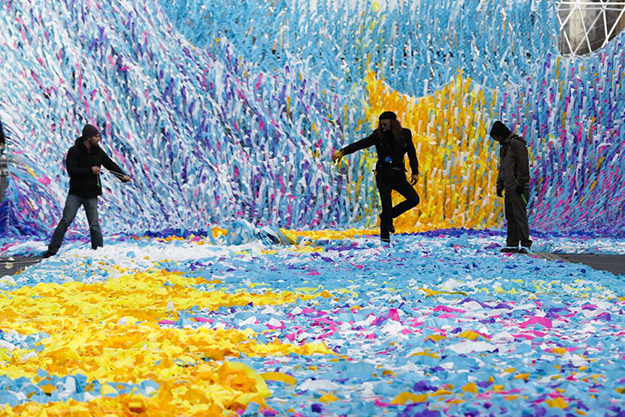 The streamers dance and sway according to the wind’s strength and direction so it looks like a really energetic wave. 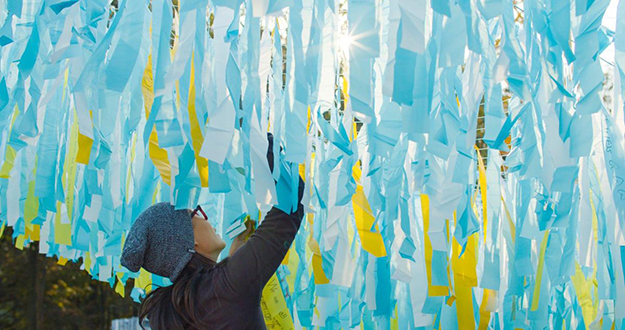 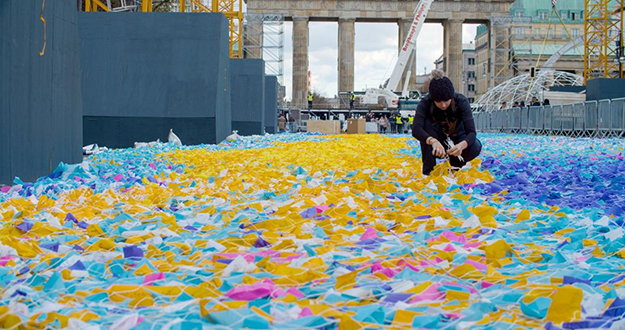 “We met hundreds of people during the installation and display of the work, locals as well as visitors from over 30 countries,” Marnie Sehayek, Poetic Kinetics’ creative strategist and Shearn’s manager said. “The German people that we met were very moved by the work, some had tears in their eyes as we spoke. Many local school children contributed messages to the work and were thrilled to see it in person.” 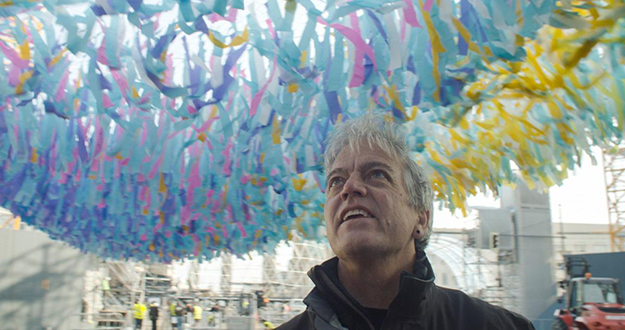 “It has been particularly gratifying to meet and speak with so many people from all over the world and to realize that our messages of hope and peace are largely the same,” Shearn said. “We are taught to fear each other, when in reality, there is no other.” 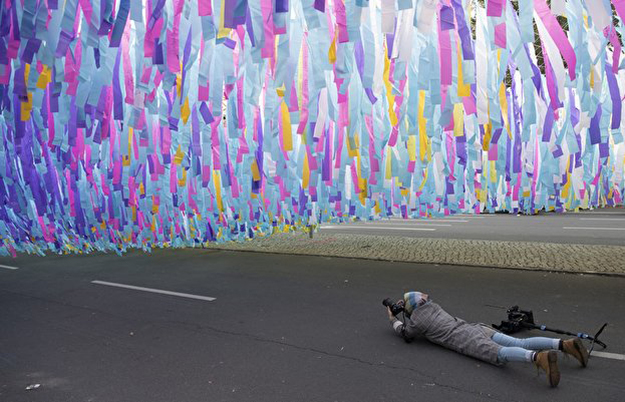 Watch the Visions in Motion dance with the wind:

Berlin Festival Week is now over but the world will not forget the installation. Small sections of the work will be put into German collections archives to remember the anniversary. Meanwhile, Poetic Kinetics is currently in search of a meaningful venue to re-exhibit the work. We’d love to experience this amazing art installation, wouldn’t you?