Would you turn a blind eye if you happen to see a racist graffiti? Or would you be like this mysterious hero who keeps covering up insulting graffiti with cat stickers? Society has been gradually embracing graffiti as a form of artistic expression in the recent years. While it is still mostly illegal, people are rather fascinated by meaningful murals and eye-catching street arts. However, not all graffiti art conveys a positive message. Sadly, some people are misusing street art to express hateful messages, racial slurs, and insulting symbols that are meant to malign certain social groups.

Manchester, just like any major cities, has its fair share of graffiti, both the good and the bad. But recently, citizens have been noticing more and more racist graffitis posted around the city. The derogatory graffitis contain provocative messages about immigration and race. However, an unknown hero had enough and decided to simply cover-up these racist graffitis with cat stickers. Along with an adorable image of a cat, the message on the sticker reads ‘There was some racist rubbish here but I covered it up with this picture of a cat.’

Someone in Manchester uses funny cat stickers to save the city from hateful, racist graffiti 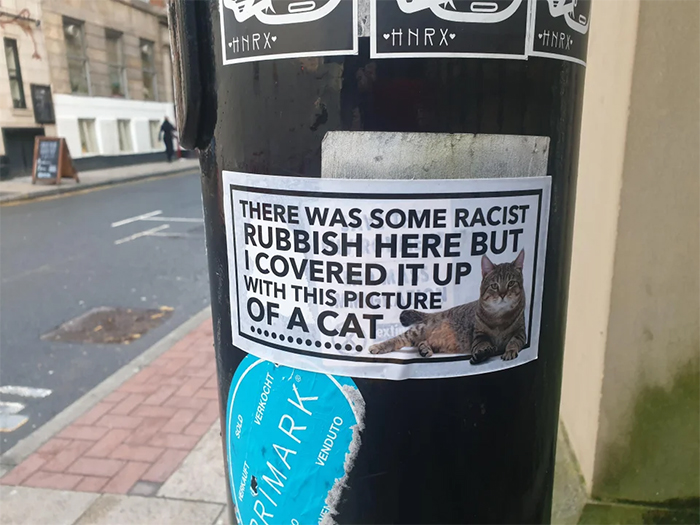 Apparently, passers-by would rather see a photo of a lovely cat over a hateful graffiti. Although technically, putting stickers on public spaces is still an act of vandalism, this is definitely something that the citizens could get behind. Hilariously, the cat stickers aren’t shy to point out what they are intended for. Even people outside Manchester applaud the idea of using cover-up stickers, especially with a photo of kitty involved. 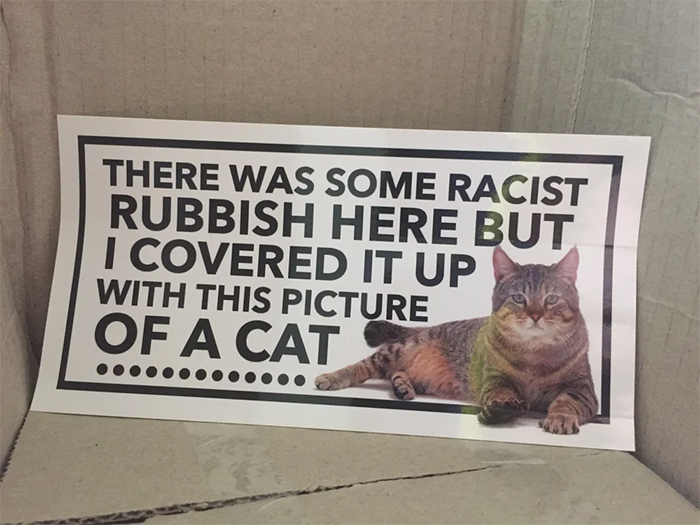 It turned out that the cat stickers were made by Cracks Appearing Distro, an Australian anti-fascist group that offers a wide range of cover-up stickers. Each sticker is printed on white gloss paper measuring 7 inches by 3.5 inches. These stickers are intended to cover up racist propaganda and other hateful scribbles on public surfaces. If your city is also laden with hateful graffitis, these cover-up stickers are a great way to erase all the negativity. 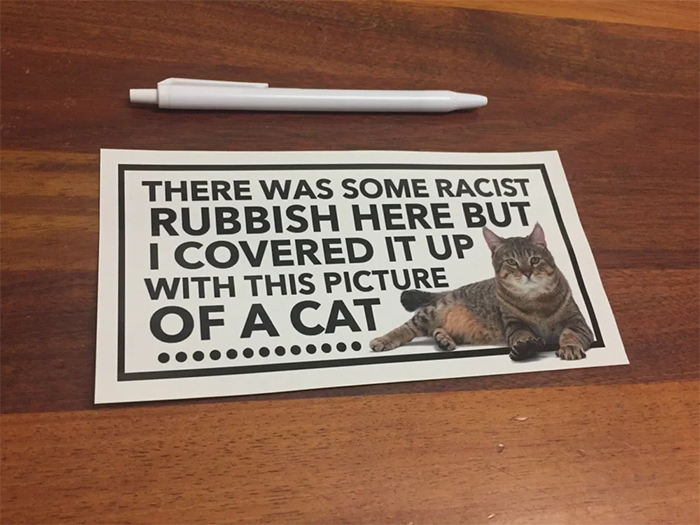 Got some stickers from #cracksappearingdistro, actually excited to find some racist shit in the wild now