Home » Uncategorized » 13 People Who Made History on Live TV

13 People Who Made History on Live TV

Live videos are a fun way to connect with people, and it shows us the real behavior of people we admire or would like to meet. Furthermore, it can be pretty enlightening and comical to see how they react to the most awkward situations.

We’re here today to show you people who made history on live TV and some ways to get past such tricky circumstances. Do take notes as they might come in handy in the future.

Jennifer Lawrence won Best Actress during the 2013 Oscar Awards but what made her win sweeter is how elegant her fall was.

Grab It While It’s Hot

Not everyone gets the chance to be on TV. Why not be a star even for just a few seconds?

Anchor Errol Barnett seems to be the perfect image of a man, and boy when he starts speaking, it’s hard to distract yourself.

Better To Have Tried Than Not at All

Hats off to these people who tried their best not to spoil these journalists reports.

What Extreme Hunger Can Do

Well, people in TV do have to make sacrifices sometimes.

A great example of teamwork.

The Show Must Go On

Slip ups are inevitable especially with musicians during concerts. Madonna shows you what to do when something goes left during her performance at the Brit Awards. 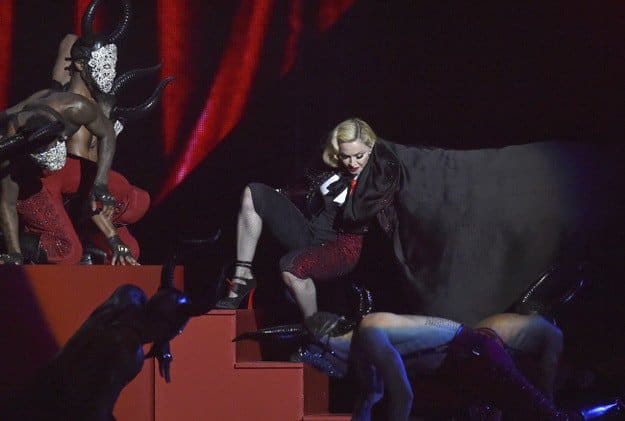 There’s a golden rule when working on TV: Never wear green. Why? Because green can be used as a green screen which creates limitless looks making you look funny.

What Was She Talking About?

Meet Vanessa Huppenkothen, the beautiful reporter who’s also probably one of the main stars in the events she covers.

Nothing spreads a viral sensation more than animal videos. Check out what happened to this cat in a French TV baking show.

Warning: “Don’t Try This at Home”

Epic fail. Though there are detailed instructions on opening a champagne bottle using a knife, you might want to try a corkscrew first.

When Your Kid Tries to Steal The Limelight from You

Who could forget this adorable and insanely funny video? Professor Robert Kelly, dashingly dressed in a suit to go on live television takes a back seat as his child unknowingly took the world by storm. Check out the original version here.

Got any secrets on how to get yourself off the hook? Do spill in the comments below.