Global warming and climate change are only some of the few devastating effects of nature’s revenge. But why would Mother Nature lay such wrath upon us? One thing is for certain, Mother Nature is definitely not the bad guy. With rampant deforestation, burning fossil fuels, and improper waste disposal, we only have ourselves to blame. In other words, human activity is causing these catastrophe and not Mother Nature.  So, is there anything we can do to reverse these threats? If we can’t find long-term alternatives to fossil fuels and find solutions to toxic wastes, we can focus on saving our forests instead. Plants and trees play a huge part in regulating climate because they release oxygen while absorbing carbon dioxide. This is why a Brazilian photographer Sebastião Salgado and his wife Lélia Deluiz Wanick Salgado plant 2 million trees in their effort to revive a barren forest.

Sebastião Salgado, an award-winning photographer, came up with this goal with the help of his wife Lélia Deluiz Wanick Salgado. The renowned photographer returned to his hometown in Brazil after covering the infamous mass murder in Rwanda back in 1994. Salgado was physically and emotionally affected by the brutality of the massacre. So, he decided to take a break for the meantime and went back to Brazil with his wife. However, his emotional pain became deeper when he saw that the rainforest in the area was no longer there. All that was left of the lush forest was a plain, barren land so devoid of life.

“The land was as sick as I was – everything was destroyed,”

As he was about to lose hope, his wife came up with a brilliant idea that will change their lives. His wife suggested that the most effective way to resolve deforestation is through reforestation. At that moment, Salgado realized that they can bring the forest back to life by planting trees. So, the couple founded a small organization named Instituto Terra. This organization aims to plant millions of trees to revive the lush forest that was once there. With the help of their supportive members, they were able to plant 4 million saplings in the area. Out of these saplings, 2.7 million of them grew into trees. And after 20 years, the tropical forest has finally transformed back to its former glory.

“And when we began to do that, then all the insects and birds and fish returned and, thanks to this increase of the trees I, too, was reborn – this was the most important moment.”

Recent report reveals that there are 172 species of birds residing in the restored forest. Along with 33 mammal species, 15 amphibian species, and 15 reptile species. Needless to say, the initiative to plant 2 million trees successfully revived an entire ecosystem. This inspiring story has moved the hearts of the people as it also inculcates the importance of plants and trees.

Here’s what people have to say about this impressive environmental deed: 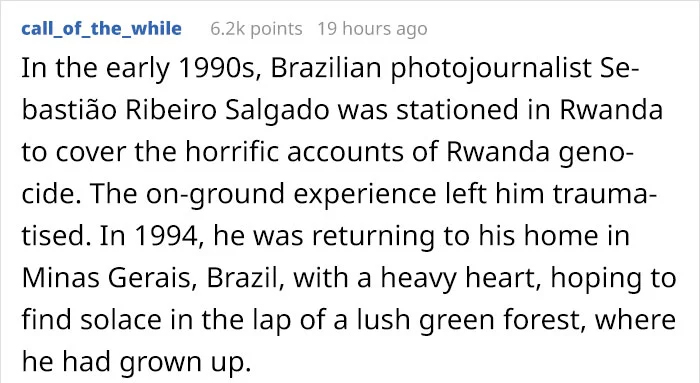